The Priory Federation of Academies Trust

The Priory Federation of Academies Trust has an estate comprising twelve academies across Lincolnshire and Nottinghamshire, covering all key stages.

We have successfully delivered ten new build and refurbishment schemes totalling £5.6 million for the Trust over six years, with the majority of projects procured through the Scape Regional Construction Framework. Many projects were carried out in ‘live’ environments meaning up to 1,900 pupils were in the vicinity of the construction work.

Our employees were required to have advanced DBS checks and, where possible, works were scheduled to avoid times when lots of children were moving around the site. Deliveries were scheduled so as not to impact school traffic and works were programmed to minimise disruption during exam periods.

During the course of the work, Lindum commissioned a “not-for-profit” business called Nuneaton Signs to produce and install a satellite image of Earth outside the Geography block at LSST in Cross O’Cliff Hill (pictured above). The image replaced  a similar image which had been in place for more than a decade and was looking worse for wear!

Refurbishment of maths block at The Priory LSST in Lincoln (£900k).

This involved demolition and reconfiguration of classrooms, staff rooms, washrooms, canteen and corridors.

The work was carried out in phases (two classrooms at a time) and after each phase, we conducted a review. After the first review, we found that walls and skirting were being damaged where pupils’ desks abutted them. As a result during the following phases we installed a strip of protective plastic at the height of the desks and changed the paint on the skirting to a more durable option.

When carrying out a review of the second phase, it came to light that while the precautions had worked on the skirting, there was still damage occurring to the walls. During the third phase, we installed a half height wall protection system to prevent any damage. On review this system mitigated any damage and was deemed successful. We then retrospectively installed this system into the classroom from the first two phases.

The maths block corridors feature bespoke oak panelling. Our joinery workshop was able to remove and adapt these to suit the refurbishment works. This provided a cost and time saving as well as preserving some of the school’s heritage. 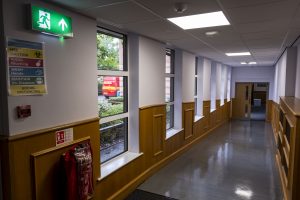 Refurbishment of science block at The Priory LSST in Lincoln (£650k).

This included demolition and reconfiguration of classrooms and store rooms
Works were stopped due to the outbreak of COVID – 19. We worked with the school to ensure that we could recommence at the earliest possible opportunity, adhering to enhanced health and safety requirements and social distancing measures.

While this would have protracted the programme significantly, we managed to work with the school and review their needs from us in terms of project delivery. Due to pupils not being in school, the academy agreed that carrying out works to a larger number of classrooms simultaneously was a feasible option. This allowed us to maintain our programme and deliver the bulk of the project in time for the new academic year. 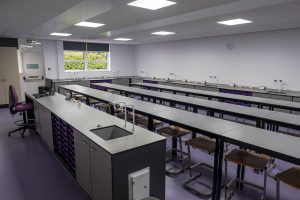 This involved the replacement of sports hall roof and M&E system and a complete redecoration of the building. It also included refurbishment of changing room areas and replacement of various windows across the grounds. The works were to be completed in summer holidays so precise programming was critical.

During the planning phase, Lindum discovered the sports hall was also used as an examination hall in the hot summer months. We advised the Trust that the heating and lighting system it had requested might not be the most appropriate for both uses.

We worked with our M&E contractor to suggest alternative solutions to make the hall suitable as a multi-purpose area.

Lighting: Alternative lighting was suggested to achieve the required 200 LUX levels for sports with the option to enhance this to 500 LUX when the area is used as an exam hall.

Heating: The original spec was to replace the blower heater located at the side of the sports hall with overhead tubular radiant heaters. This system would only heat the area which the staff said got too hot in the summer, especially with numerous pupils in exam conditions. M&E contractor proposed an overhead, externally vented heating ‘sock’ system. This allowed air exchange as well as heating which significantly improved the functionality of the Hall. Also works off a thermostat/timer which the other system didn’t.

In addition, our decorators were able to make the school aware of Sports England’s guidance on paint colours, provide samples of these and carry out works to ensure that the best possible environment for sports. 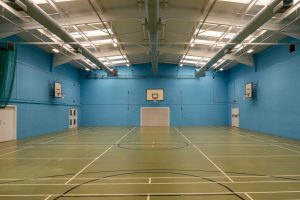