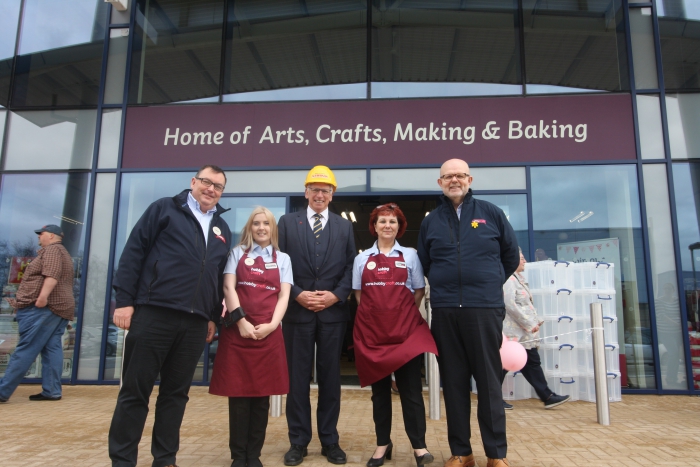 The latest shop unit to be built by Lindum Group on the Valentine Retail Park opened its doors to the public today.

Hobbycraft welcomed its first customers at 9am and staff said they were bowled over by how popular it was proving to be.

The shop has been built in place of the old American Golf store, next to furniture retailer AHF.  American Golf has relocated to a new unit next to TK Maxx, which was also built by Lindum Group.

Hobbycraft has created 22 new jobs by opening its Lincoln store, which is its first in the county.

Head of retail Bruce Gibson said: “The store is beautiful, just stunning. It’s the best one so far!”

The Hobbycraft unit is the latest in a long line of projects to be completed by Lindum on the Valentine Retail Park.

Recent work there has included construction of an 8,000sq ft extension to The Range store, including a service yard and car park alterations but over the last decade, Lindum has managed the construction of, among others, Asda Living, Next and TK Maxx. We also refurbished the old Game store to create a Costa Coffee.

MD of Lindum Construction, Simon Gregory, said extensive planning and safety assessments were required throughout the project as the site was a “˜live’ retail park, which is used by hundreds of people every day.

“We are delighted to deliver this job – on time and on budget – for a valued Lindum client,” he said.

“The team worked hard to make sure the existing retailers and their customers could carry on with business as usual.

“We are very happy with the final result.”

In addition to Lindum Construction’s work on site, Lindum Plant division carried out careful dismantling of the old store, Lindum’s Waste division removed and recycled demolition materials and KGM, our roofing and cladding division, worked on the exterior of the building.

Store manager Tracey Goddard said she was delighted to see the store open for business.

“I’ve been with Hobbycraft for 16 years and most recently was working at the Peterborough store,” she said.

“But I live in Saxilby and the company had promised me for years that we would get a Lincoln shop. I am so excited that it’s finally open.

“Because I live close by, I’ve been popping down to the site regularly and watching the building go up. I’m really pleased with the final result.”

Also working there is Elise Nicol, who has worked for Hobbycraft for nine years.

She said 600 people had applied for jobs at the Lincoln store, from which 18 employees and three team leaders were appointed.

“Every new employee was trained from scratch, which allowed us to share our first-hand knowledge and experience of working here.

“It is such an amazing place to work and I’ve never seen a store so busy.”