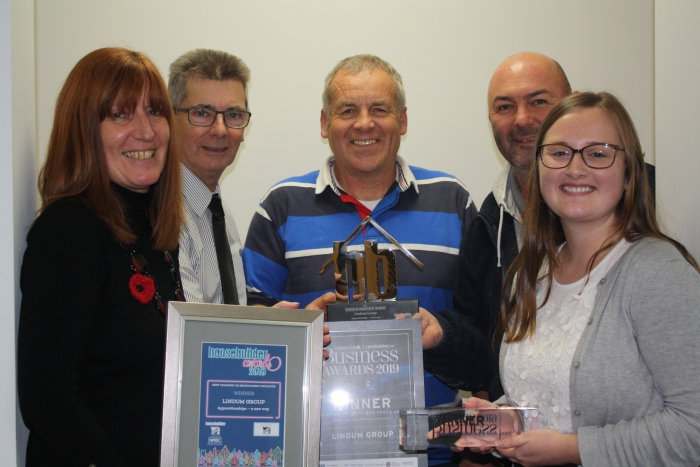 An innovative approach to training the next generation of construction workers earned local builders two high-profile awards in the space of one week.

Lindum Group’s commitment to educating its apprentices and trainees was recognised at the Lincolnshire Business Awards and at the national Housebuilder magazine awards in London.

At both events, the company was praised for its proactive approach to training, which has included using retiring and experienced employees as mentors for younger recruits.

The programme was set up to fill the gap between what academic studies teach and what practical site work requires.

Training Manager Sara Hobson said she was delighted the scheme had been recognised at both a local and national level.

“We are absolutely delighted and really did not expect this. To win two awards in the space of seven days is incredible,” she said.

“The mentors provide a support system that doesn’t exist elsewhere and the apprentices have someone they can lean on during their early years in construction.”

The Lincolnshire Business Awards took place at the Epic Centre at the Lincolnshire Showground on October 17. Lindum was awarded the Education, Training and Skills accolade, which was sponsored by the University of Lincoln.

Judges said they were impressed with the businesses use of experience to nurture young talent and had been won over by the flexibility of the company’s training budget.

The Housebuilder awards were hosted by comedian Dara Ã“ Briain at The InterContinental Hotel – The O2 in London on October 24.

Sara said both awards were testament to the entire company’s commitment to training.

“It’s been a really good year and everyone has been so supportive – it’s a really hard industry. Across the group, everybody has put in so much work and we try to bring young talent through.

“As well as the apprenticeship scheme, we have set up a mock construction site at our offices to give trainees intense tuition before they go on site.

“We have also devised an education programme for technical roles, which sees trainees spend time in disciplines such as surveying, site management, health & safety and estimating over two years before finally choosing which area to specialise in.”