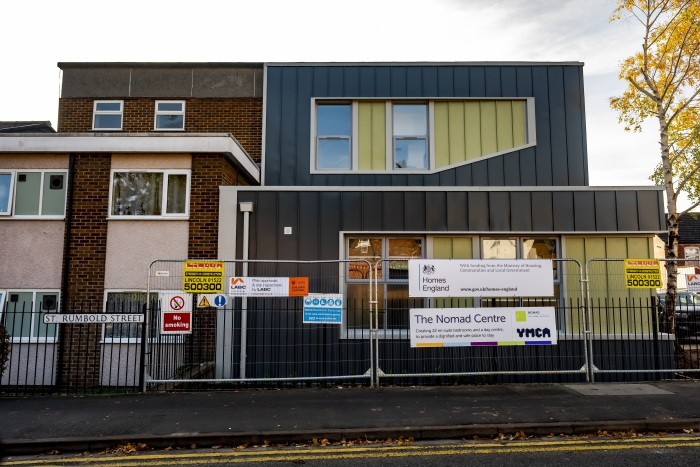 A new shelter for homeless people which was built by Lindum for the YMCA was officially opened in Lincoln today.

The Nomad Centre in St Rumbold’s Street was unveiled by Lord Lieutenant of Lincolnshire, Toby Dennis, during a ceremony attended by funders, dignitaries and YMCA residents.

It signals the end of six months of construction work and years of fundraising by the charity and its supporters.

Lindum is proud to have been involved in the project, which involved the creation of a new shelter comprising 20 en-suite bedrooms, two move-on accommodation rooms, a kitchen and a day centre.

It replaces the old night shelter on Monks Road and will support those without homes, those forced to sleep rough, those with complex difficult backgrounds and those who have suffered from abuse, addiction or have fallen on hard times.

The £1.6 million project has been funded largely through donations and support from the community. Support has come from a wide range of partners including from Homes England, which donated over £700,000 to the project.

YMCA Chairman Ian Sackree said: “YMCA Lincolnshire is very grateful to everyone who has supported the Nomad shelter over the past 20 years and those who have helped make our dream of modern, dignified and private accommodation for those without homes a reality.

“All of this would not be possible without the donations and generosity of the local community. We very much appreciate the many generous and kind donations of funds, food and provisions over the years. We simply could not have continued to operate the shelter for the past 20 years, or created the new Centre. We’d like to express our sincere thanks to everyone involved.”

The new accommodation has been created through a redevelopment of an old dance, gym and training facility, although a newly constructed extension to the building has also been added.

The end of the project cements a partnership between YMCA and Lindum Group which dates back 30 years.  In 1989 Lindum built the original building which has been redeveloped and the two organisations have remained closely linked ever since.

As well as building the extension, Lindum and its subcontractors have also supported the project in other ways.

Quantity Surveyor Jake Lee said: “We sent a letter to our subbies asking them if they would be able to donate further and a number of then replied to say they would,” he said.

“Our demolition team Expotrak gave £5,000 and electrical contractor Brook and Mayo paid for a TV for one of the rooms. Others contacted the YMCA directly to see how they could help.

“It was great to see local businesses pulling together to support this great cause in such a way.”

Alongside the construction work, Lindum offered work experience placements to two residents of the YMCA.

One of these was a long-term photography project, which involved a resident named Mark visiting Lindum’s Sincil Street site to take regular pictures of the Everyman cinema development taking shape.

The project allowed Mark to develop his technology skills and will provide recent work experience which he could add to his CV to assist with job-hunting.

Mark said: “I have enjoyed volunteering with Lindum very much and I am thankful to the YMCA in Lincolnshire for creating this opportunity for me. I have learnt many new ICT skills that I believe will be very useful in a variety of potential job opportunities going forward.

“I have been motivated greatly, seeing an increase in confidence and a boost to my overall feeling of wellbeing which has been helped a lot by the interaction I have had with the staff at Lindum. For this I am most grateful.”

Earlier this year, Lindum also donated a box of food supplies to the charity, which had been collected by staff, and is intending to continue its support of the charity in the future.

The current YMCA/Nomad emergency accommodation is the only permanent direct access homeless provision in Lincolnshire and demand for the services is extremely high, with street homelessness in Lincoln three times higher now than in 2010.

Chief Executive of City of Lincoln Council, Angela Andrews said: “We are absolutely delighted to see the opening of brand new Nomad Centre – this facility will help to change the lives of some of the most vulnerable in the City whilst ensuring their dignity and privacy – we would like to congratulate Ian, Caroline and their teams for their tremendous work in making this happen.”