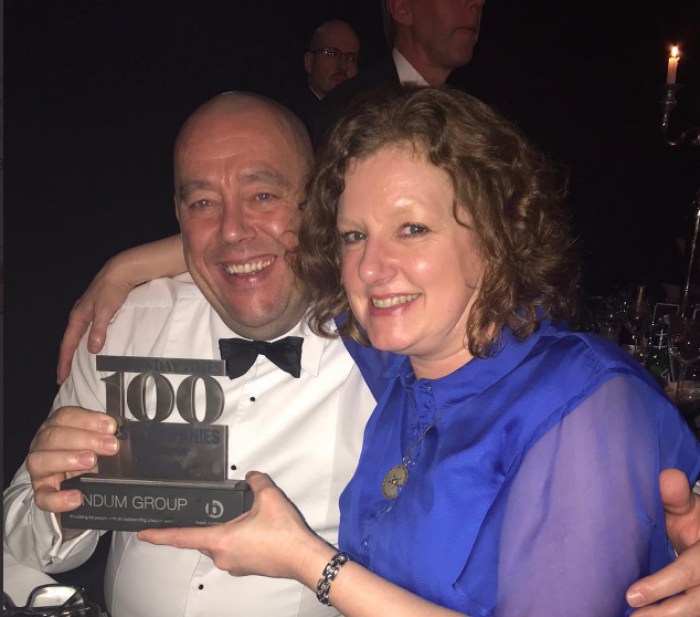 A construction company which strives to give something back to the communities in which it works is officially one of Britain’s best employers.

For the 16th time, Lindum Group has been named among The Sunday Times Best 100 Companies to Work For.

Last night, during an award ceremony at Battersea Evolution in London, it was revealed Lindum had been placed 36th in this year’s nationwide list.

It follows a survey of employees, which measured factors such as personal growth, wellbeing, leadership and team spirit.

Among the survey results was evidence that Lindum’s employees felt increasingly positive about the work the company does to support local communities.

From making donations to charity to working with local suppliers, staff said they felt encouraged by the effort Lindum makes to leave an impact beyond completion of its construction projects.

During 2019, Lindum donated to 81 different good causes in the community including Macmillan Cancer Support, Alzheimer’s Society and the Lincolnshire and Nottinghamshire Air Ambulance.

The company also gave £2.50 to Kids Lincolnshire (previously Strut in the Community) for every completed Best Companies survey form – resulting in a donation of £880.

In addition to this, Lindum worked with social enterprises on 47 of its construction projects, provided 53 work experience placements and attended 41 job fairs and career days.

Employees supported the creation of a community garden in Lincoln, helped to repair a pensioner’s fire-damaged allotment and worked with more than 30 prisoners providing interview training and guidance on CV writing.

Social value coordinator Hayley Cowell said this was just a flavour of the community work Lindum had completed.

“We continually strived to be a good neighbour and responsible employer. For us, it’s vital to have a purpose beyond simply making a profit,” she said.

“For example, we work closely with schools and colleges to promote careers in construction. In doing so, we aim to build confidence and self-esteem, create accessible pathways into employment and develop skills to improve the employment prospects of young people.

“In 2019 we engaged with 31 education establishments talking to more than 10,000 school pupils from across Lincolnshire, Yorkshire and Cambridgeshire. We provided 53 work experience placements from 22 education facilities, in a range of disciplines including joinery, plant, design, finance, HR and marketing. Four placements turned into full time employment with Lindum.”

Among those who attended the ceremony in London was Lindum Architectural Technician Ian Hind.

Ian has worked in the company’s Building and Maintenance Services division for 18 years and one of the key projects he’s been involved in was the £700,000 community restoration project of Market Rasen Train Station.

Lindum bought the dilapidated station at auction and set up a Community Interest Company to oversee the work and bring it back into use.

He said: “I was involved in the project from the start and it will definitely stay in my mind as it was such a huge community effort. Everyone from the school, to the local theatre group and local children were involved.

“We opened the building site to the public during a Heritage Open Weekend. I wasn’t sure if anyone would come along but we were overwhelmed. There was so much interest. It was great.

“The station project is a really good example of how companies can work with the community to improve the local environment.”

In total, 18 Lindum employees attended the award ceremony in London. Brian O’Rourke (50), who works as a contracts manager for roofing cladding division KGM said he was delighted to be going along.

“It is my first ever black tie event, so I’m looking forward to it,” he said.

“I actually worked for Lindum Group while I was still at school.  I started on site properly the day after I finished my exams in 1985. Initially I was a subcontractor working alongside my dad. I came on the books in 1999.

“I started as a labourer and have worked my way up to being a contracts manager. I really like working for Lindum and have actually had other members of my family come onto the books too.

“I am part of the share ownership scheme, which means I buy shares in the company every month. This really makes me feel part of the business.

“I definitely feel like I’ve been looked after during my time here.”