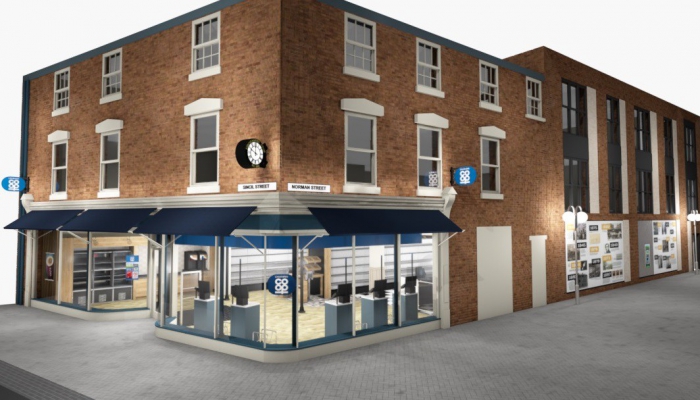 Lindum is to begin putting in place a new curved wooden faÃ§ade at 18 to 20 Sincil Street, which has been carefully crafted to replicate the area’s original Victorian street scene.

The structure will form the front of the Co-op’s new store, which is due to open this summer, next to the new bus station.

Lindum Joinery General Manager Paul Brown has overseen work to create the shop front, as part of the ongoing renovation work being carried out by Lindum Construction.

He said the frame had been delivered to the site and should be completely installed by the end of next week.

“This is the latest shop front to be completed by the specialist joiners at our North Hykeham workshop and follows on from the shop fronts installed further along Sincil Street,” he said.

“Like the others, this frame is made from sapele hardwood and is based on the drawings from John Roberts Architects.

“Each shop front that’s installed adds to the regeneration of Sincil Street and I can’t wait to see the full impact when it’s finished.”

Lincolnshire Co-op said its new store will pay homage to the community retailer’s first-ever shop, which opened more than 155 years ago at 1 Napoleon Place, where Pelham Bridge is now.

During Lincolnshire Co-op’s Cornhill Quarter development, historic buildings in the area have been sympathetically redeveloped, restoring original features while adapting the buildings so they’re suitable for modern retail and leisure use.

The Sincil Street Food Store will continue this theme. Modern facilities, such as a food-to-go area including takeaway drinks, snacks and hot food and some self-scan tills, will blend with traditional design touches. Vintage-style light features will be complemented by a patterned tile and wood-effect floor.

Lincolnshire Co-op’s Store Development Manager Matthew Wilkinson said: “This is an exciting new format for Lincolnshire Co-op and we look forward to providing workers, shoppers and travellers in the city centre with a high-quality “˜on-the-go’ retail experience.

“It’s particularly special to be launching this new service close to where Lincolnshire Co-op began at 1 Napoleon Place. We’ve tried to pay tribute to that first shop with our choice of materials.

“Just like in 1861, we’ll give dividend to our members. We’ll also have a range of Love Local goods on offer and donate to local good causes through our Community Champions fundraising scheme.”

Lincolnshire Co-op aims to move its pharmacy and post office, both currently within the City Square Centre, to alternative city centre premises in late 2019. No date or locations for these moves have been confirmed at this stage.

The Society’s coffee shop within the City Square Centre will close in September. This is due to the new offer the “˜on-the-go’ food store will provide and because there is a wide range of alternative coffee shops and cafÃ©s in the area.

At the time the coffee shop shuts, the team of colleagues will be offered redeployment opportunities within Lincolnshire Co-op.

Eventually, the plan is to replace the City Square Centre with a new building in keeping with the rest of the Cornhill Quarter.

However, this is in the early stages of planning and currently all Lincolnshire Co-op’s services, and the tenants within the centre and along Waterside South, continue to trade as normal.