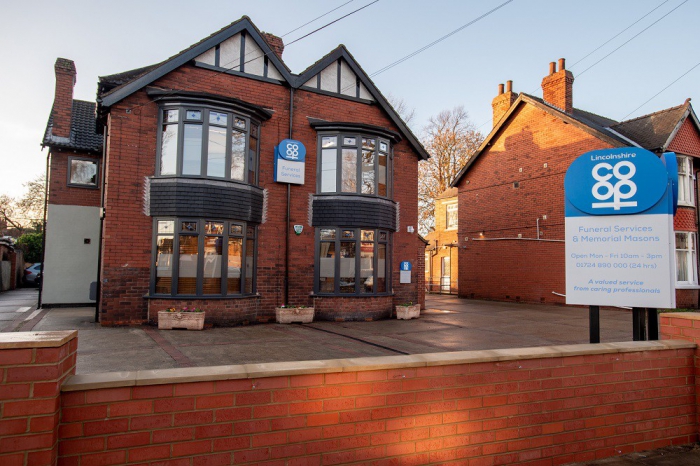 The two semi-detached properties had been knocked into one and used as a commercial building before being completely rewired, replastered, redecorated and slightly extended.

It has also been given a fresh look outside including new signage and stained glass detail in the windows.

The work was completed in ten weeks by Lindum’s BMS division and an official opening ceremony was held on Wednesday 19th December, with a service led by local clergy and attended by guests including Mayor of North Lincolnshire Councillor John Briggs.

Lincolnshire Co-op President Steve Hughes unveiled a plaque, speeches were made and donations were given to local charities Lindsay Lodge Hospice and the Rainbow CafÃ©, which each received £250 as part of the ceremony.

“We have a fantastic team here and they’re eager to help people. Whether they need to make arrangements, ask questions or simply have a chat over a cup of tea, our colleagues are ready to assist,” he said.

“We used 10 of our own Lindum employees to carry out the work, who were assisted by some specialist local subcontracts,” he said.

“The building was completely damp proofed and given new doors and windows.

“It came on the back of a number of other projects we’ve completed for Lincolnshire Co-op and alongside the ongoing maintenance which we do for the business.”

The new branch means people in Scunthorpe can pop in to see Lincolnshire Co-op’s professional colleagues about funeral plans, advice on arrangements and ask any questions they may have.

There is also a display showing the handiwork of Lincolnshire Co-op’s memorial masons, who use state-of-the-art technology and hand carving skills to create special tributes.

It joins Lincolnshire Co-op’s Westcliff Pharmacy and Willoughby Road Food Store and Post Office in Scunthorpe. The branch will be the Society’s first funeral home in the town and the 22nd in its trading area.

“The money is an amazing gesture, and not only will it help us to run our services, it’s also important for us to have a good relationship with funeral homes,” he said.

“The money we need to run our free service is immense so any donation to us is greatly received. It’s a brilliant facility here and it’s a terrific addition for the community.”