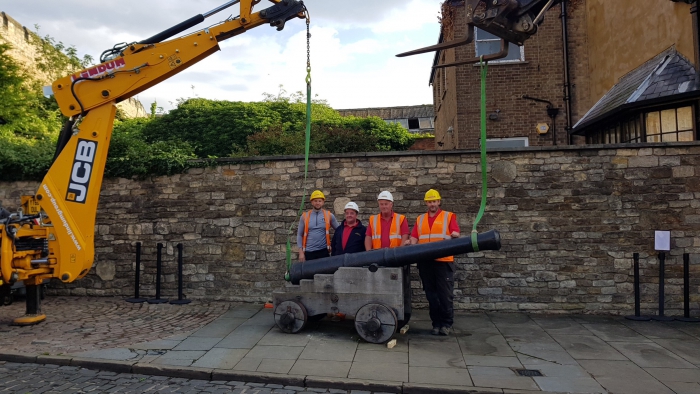 A 300 year old cannon is back in its rightful place outside Lincoln Castle thanks to the early morning efforts of construction company, Lindum.

The well-known landmark had been cordoned off after it was mysteriously toppled 10 days ago.

Despite attempts by a group of five people, the heavy cannon could not be tipped back into place manually.

So at 6.30am today, a team from Lindum visited Castle Square with a telehandler and a JCB to manoeuvre the structure back into place.

“We have a contract to carry out maintenance work for Lincolnshire County Council, through Vinci Facilities, which is how this job first came in to us,” he said.

“We tried to lift it back by hand but it wouldn’t shift. It really makes you wonder how it came to be tipped up in the first place.

“Our Contracts Manager, Shaun Goodliffe and the team, enlisted the help of our colleagues in Lindum Plant and they brought up two of our own mechanical lifting appliances, so we could lift it in a controlled and safe manner back into its rightful place.”

The cannon dates back to 1721 and has been outside Lincoln Castle since 1982. Its wooden plinths were installed five years ago.