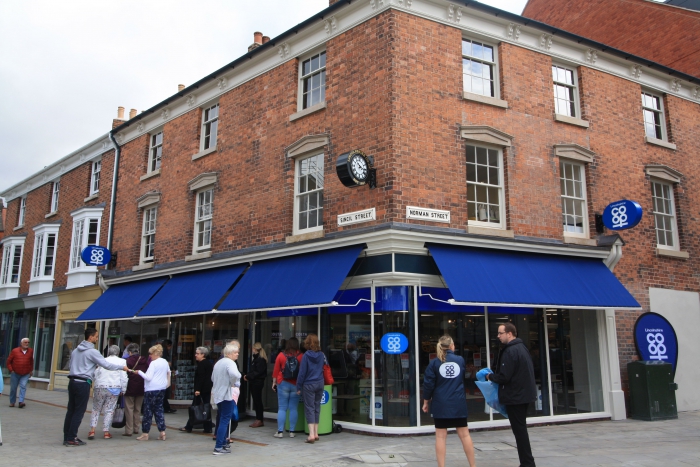 The latest shop to open in Lincoln’s historic Sincil Street showcases the expert craftsmanship of carpenters and builders from Lindum.

Lincolnshire Co-op opened the doors to its Food Store in the city’s Cornhill Quarter on Wednesday, August 14th.

It features an impressive curved glass frontage, which is set in a new wooden shop front inside the original building.

The construction work was completed by Lindum on behalf of the Co-op, which is leading the multimillion-pound redevelopment of the area which has already seen many historic buildings sympathetically restored while being adapted for modern commercial use.

Site manager Neil White said the food store shop front was the most complicated of all the shop fronts undertaken during the redevelopment.

“This work involved matching up the new frontage to the existing building, which included removing old brickwork at ground level and rebuilding it to match the existing curve. It also involved retaining a 1940s glass panel overhead,” he said.

“The new woodwork and the curved glazing had to match the size and shape perfectly. There was no room for error and it was a huge relief when it was all finally in place.

“The structure was built at Joinery’s workshop in North Hykeham, which is also where the other shop fronts along Sincil Street were crafted. Like the others, this frame is made from sapele hardwood and is based on the drawings from John Roberts Architects.”

Design touches also reflect the building’s heritage, such as vintage-style lighting, tiled flooring and a hanging clock on the corner on Norman Street and Sincil Street.

During research into the building’s history, it’s been discovered that part of it was once a Lincolnshire Co-op – it was the Society’s “˜Colonial Meat Store’, selling goods from across the globe from around 1908 until 1916.

Chief Executive of Lincolnshire Co-op Ursula Lidbetter said: “After years of working on the Cornhill Quarter redevelopment, it’s a special moment to be opening our new food store in the heart of the area.

“This is a modern store with high-quality facilities perfect for customers in a bustling city centre environment, whether they’re popping out for lunch, grabbing a meal before catching the bus home or refuelling during a shopping trip.

“Throughout the Cornhill Quarter development, we wanted past and present to complement each other so we’ve thought carefully about that during the store’s design. I’m delighted with the results.”

The new store include a range of chilled and fresh meal options, takeaway drinks, snacks and hot food, plus self-scan tills. There is also a free water bottle refill station.

Lincolnshire Co-op runs a pharmacy and post office in the nearby City Square Centre.

The Society is applying for permission from NHS England to move the pharmacy to a refurbished unit at 15 Sincil Street. If approved, it is expected this move would take place in early 2020.

Eventually, the plan is to replace the City Square Centre with new buildings in keeping with the rest of the Cornhill Quarter. This is in the early stages of planning and currently all services, and the tenants within the centre and along Waterside South, continue to trade as normal.