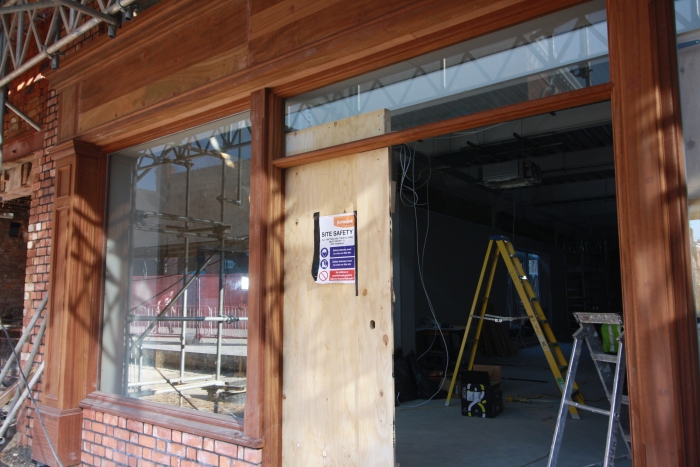 Months of painstaking work to replicate Victorian shop fronts on Lincoln’s Sincil Street will finally be unveiled to the public next week.

Scaffolding is now being removed from the front of renovated buildings opposite the award-winning Corn Exchange building in the Cornhill Quarter.

Visitors to Lincoln will soon get a glimpse of how Sincil Street will look once its multi-million pound transformation is complete.

The first of the shop fronts will surround the entrance to the new Lakeland store which opens for business on November 10th. It was carefully designed by architect Keith Neill-Smith, from Clarity and is based on old pictures and photographs of the street in the 1900s.

Although the original features were made from oak, the new fronts are being crafted from sapele hardwood, which was chosen for its durability.

Expert joiners from construction company Lindum have spent months creating the structures, five of which are being installed as part of Phase Two of the Cornhill renovation project. Special tools were commissioned to complete the work.

Construction for Phase Two is progressing well and on track for completion by Christmas 2018.

“The idea is that Sincil Street will be taken back to how it would have looked in the early 1900s,” he said. “While the original shop fronts would have been made from material such as oak, we are using sapele hardwood, which is a stable and durable product.

“The first shop front took four weeks to make, and we still have the door to finish, and possibly the fascia.

“We’ve had two of our joiners working on it and we’ve had to have special tools made to produce the architectural modelling. It is a fascinating job and it’s been great to work on. It is proper, skilful joinery and we would love the chance to do more of this kind of work.”

In August, the Co-op announced that national retailer Lakeland would take on a 4,000 sq ft space in one of the newly refurbished Sincil Street shops units. The kitchenware company will be relocating from its current unit at St Marks shopping centre to 32 Sincil Street.

It followed on from news at the end of last year that Everyman cinema will open a four screen cinema in Phase Three of the development, which recently received planning permission.

Everyman will be located opposite the Corn Exchange building, which completed in October 2017 and is home to Cosy Club, Flying Tiger Copenhagen, Moss Bros and Thomas Cook.

Julian Rayner one of the joint owners of Lakeland said: “After a long stop in Lincoln at the old St Marks station, we're pleased to be moving closer to the centre of Lincoln to enjoy the newly refurbished area of Sincil Street which we think will be an entertaining and enjoyable addition to the vibrant Cornhill Quarter.”

Tim Bradford, Managing Director at Banks Long & Co, one of the joint agents responsible for letting the scheme, alongside KLM Retail said: “It is great to announce this high-quality brand for The Cornhill Quarter which will further enhance the scheme. Lincoln is a prime location for retailers, attracting around 4 million tourists a year from both the UK and internationally with an available spend of £984.5 million. We are looking forward to welcoming many more brands for phase two of the scheme, which we hope to announce soon.