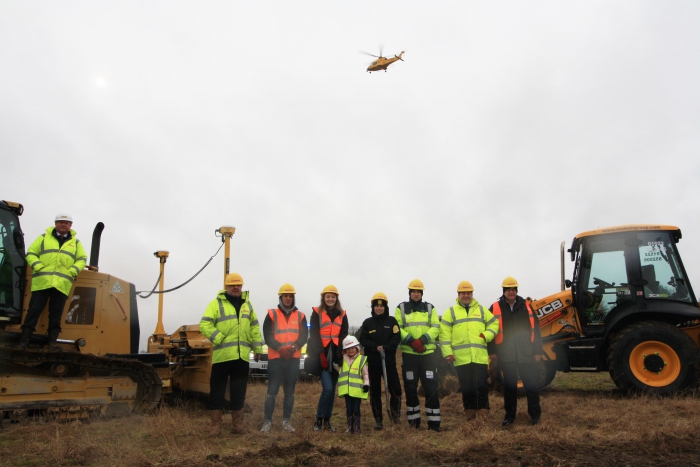 Lindum has started work on a new home for the Lincs & Notts Air Ambulance off the A15 at Waddington near Lincoln.

Chief Executive Officer Karen Jobling and Chief Pilot Llewis Ingamells were joined by former patient Ella Burgess-Wood and her family, as they all helped to put the first set of spades in the ground on Friday, February 28.

Four-year-old Ella was airlifted by our crew on board the Ambucopter on Saturday 21st September 2019, after her dad’s car was involved in a collision with a lorry on the A15 near Lincoln while on the way home from her fourth birthday party.

At the turf cutting, Ella couldn’t wait to muck in and help mark this huge milestone for the Charity.

Ella’s mum, Georgia Burgess-Wood, said at the event: “We are so thankful that Ella has been invited to today’s turf cutting. It’s really helped to turn a negative experience into a real positive for her. She loves to tell all her friends in school how she went in the yellow helicopter.

“The new Headquarters will be a great move for the Charity, and we want to support them in any way we can. We are looking forward to doing some fundraising later on in the year.”

With the helicopter currently operating from RAF Waddington and the Charity HQ located at Bracebridge Heath in Lincoln, the move will see staff and crew come together under one roof.

And it will provide a unique opportunity for the organisation to welcome former patients, schools, volunteers, donors and fundraisers to see the helicopter and witness how their support really makes a difference.

To support the funding of its new home, the charity received a capital grant of £1.82million from the Department of Health and Social Care last year.

Karen Jobling, Chief Executive Officer at Lincs & Notts Air Ambulance, said: “Our day-to-day operations are solely funded by donations so when we were successful in securing a capital funding grant for this new build, it was a real boost and at a time when we needed it.

“Being able to bring staff and crew together under one roof, and future proof the Charity’s work, is something everyone is really looking forward to as we work on some major projects such as our continued trial of 24/7 operations and our move to clinical independence.

Construction of the new headquarters is being led by Lindum Group and is due for completion by the end of 2020 with staff and crew anticipating moving into the new HQ and airbase and offices just before Christmas.

Once complete, the HQ will have its own purpose-built hangar with space to enable on-site engineering, along with housing for the Charity’s Critical Care Car benefitting from direct access onto the road network for faster response times. There will also be an enhanced training facility for the crew.

Lindum Board Director Edward Chambers said: “We are very pleased to be building a new HQ for the Lincolnshire and Nottinghamshire Air Ambulance, a superb local charity which means a great deal to lots of people in our community.

“Today’s turf-cutting was particularly special as we got to meet Ella who is living proof of the invaluable role the Lincs & Notts Air Ambulance plays in local emergency care.

“This project is just a few miles from our offices in North Hykeham. Many of our own local employees will be working at the site, along with subcontractors from the surrounding area.

“The Charity is an organisation which Lindum has supported in the past and most recently we staged a second- hand toy sale just before Christmas. We are looking forward to continuing our relationship with the charity over the coming months.”

Captain Llewis Ingamells, Chief Pilot at the Lincs & Notts Air Ambulance said: “Years of work have gone into this, from finding an operationally perfect piece of land through to the full design of a state-of-the-art day and night capable heliport, operations building, maintenance hangar and much needed new offices.

“One of the things the crew enjoys the most is meeting patients and supporters and this move will make it much easier to welcome visitors and introduce them to the crew, the helicopter and also to the charity staff working behind the frontline operation, showcasing just what goes into keeping us operational.

“It will be sad to leave RAF Waddington where the support we’ve had has been fundamental to the success of the Lincs & Notts Air Ambulance over the last 25 years, but with our efforts in trialling a move to 24/7 operations, our advancement in clinical care and equipment, a bespoke facility is fundamental in our success for a rapidly advancing operation.”

To keep up to date with the latest developments of this project, or if you’d like to find out more about the life-saving work of the Lincs & Notts Air Ambulance, visit www.ambucopter.org.uk

Work has started on the construction of a new headquarters, training centre and air base for the country’s longest-serving air ambulance charity. Lindum Group is now on site at Alconbury Weald where it is building new offices, a dedicated training centre, rest facilities for crew and clinicians and new community and patient hub for the […]