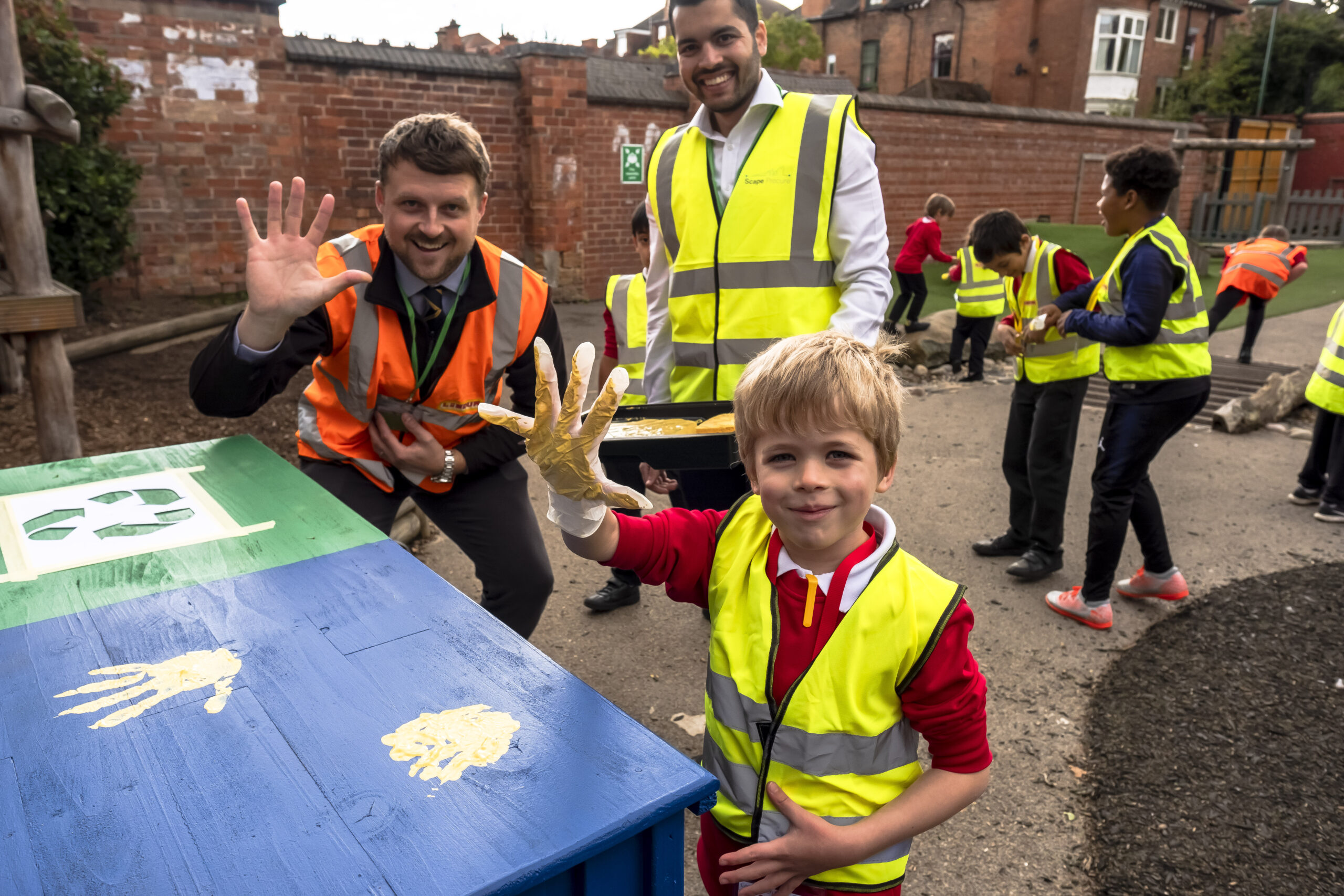 I was delighted by the professional job the Lindum’s team did in school.  I am also really pleased to be joining with them in thinking about recycling and reusing our discarded and unwanted items.
Rob Campbell | Head teacher
Claremont Primary School,

Children in Nottingham were given lessons in recycling and sustainability as part of building work at their school.

Pupils from Claremont Primary School, in Claremont Road, were taught about the impact of single-use materials and shown how to reduce the amount of waste that’s sent to landfill.

They also took delivery of new playground bins, which support the school’s efforts to recycle more rubbish by having clearly defined sections for different types of waste.

They were handed over after Lindum completed building work at the school and pupils customised them by painting their handprints on top.

In addition, teachers delivered an assembly, which was prepared by Lindum employees, and explained how the stores had been made from recycled wood.

Head teacher Rob Campbell said: “I was delighted by the professional job that Graham and the Lindum’s team did in school.  I am also really pleased to be joining with them in thinking about recycling and reusing our discarded and unwanted items.

“This is an important life skill for our children and the message in the assembly, reinforced by the kind donation of our litter bins on the playground is a vitally important one for the future of our planet.

“Thanks again from all of us at Claremont Primary and Nursery School.”

The work was procured through the Scape Regional Construction framework and as part of the contract, Lindum was required to deliver additional ‘social value’.

Lindum worked with the school to see how it could leave a lasting legacy once the construction contract was completed.

Project manager Matt Jones said: “The school is working really hard to educate children about climate change and the impact that human behaviour is having on the planet. While this is a huge subject, the concept of recycling is easy for them to understand. We wanted to support the school in this ambition so asked how we might be able to help.

“They said they would like new bins so they could encourage children to start separating their own waste, meaning the school could increase the amount of rubbish it recycles. We agreed to donate the bins but also suggested we donated bin stores, which could be decorated in a way that made it easier for children to determine which bin they should use.

“We commissioned Pelican Trust to make the stores out of recycled materials and then our Lindum decorators painted them green on one side and in the school colours in the other.  We invited the children to customise them once they were delivered.

“It’s been a fantastic project to be involved in. As a company, we are striving to improve our sustainability so to work with young people in this way is particularly rewarding.”

Work has commenced on two educational facilities at Glenvale Park, a 3,000 home sustainable urban extension to the north of Wellingborough, Northamptonshire. The works comprise a new two-form entry primary school for up to 420 pupils as well as a 75-place nursery and community centre. Alongside these works, an exciting new children’s play park facility […]

Nursery school pupils are making the most of a tranquil new learning environment thanks to a donation from a Lincoln charity. Children at St Giles Nursery are enjoying their new Kindness Cabin, which has been installed in the school’s garden in Addison Drive, Lincoln. The cabin was funded through a donation from local charity BNA […]