Taste Of Success For Lindum And Greggs 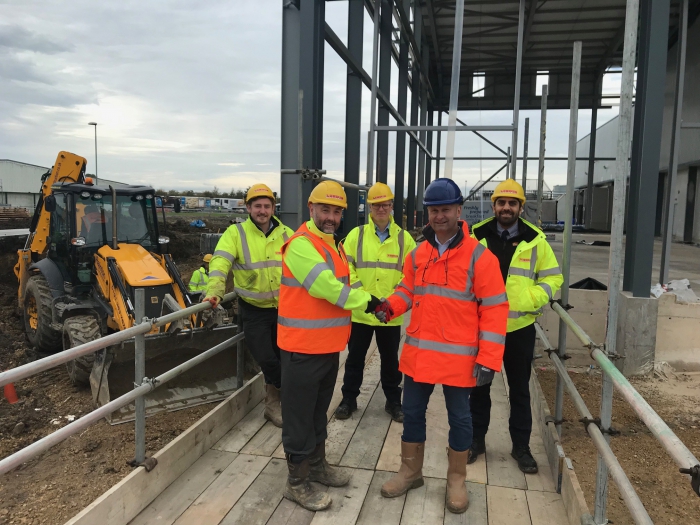 Building company Lindum Group has cooked up a great tasting relationship with one of the UK’s leading food-on-the-go retailers Greggs thanks to a decade of successful construction projects.

Lindum’s York Division is currently working on a major extension to Greggs’ Gosforth Park Doughnut Centre of Excellence in Newcastle.

The project is due to finish in March 2020 and is phase three of a bigger contract, which also included the installation of a new doughnut production line and spiral freezer.

Elsewhere, at the nearby Balliol Park savoury Centre of Excellence, Lindum York has recently completed a mixing room extension.

The jobs in Newcastle follow contracts completed by Lincoln-based division Lindum Construction, which have included work at Greggs facilities in Cumbria, Glasgow and Leeds.

Greggs Project Manager Peter Boughton, who has worked for the company for 18 years, has observed all the Lindum projects since they began in 2009, when a cake Centre of Excellence was built at the North Lakes Bakery at Penrith.

He said the work was part of a £100m three-year supply chain investment programme by Greggs, which is now nearing completion.

“The Gosforth Park and Balliol campus has been owned by Greggs since the 1990s and currently employ more than 600 staff, working shifts around the clock,” he said.

“The Gosforth facility produces doughnuts for Greggs shops around the UK and the company has more than 2,000 retail outlets in the UK and a turnover of over £1 billion.

“Our investment here sends a message of strength, growth and stability to all our employees, many of whom are shareholders in the business and benefit directly from a profit share scheme.”

The development represents part of a major strategic change for Greggs, which has moved from a traditional bakery business to a modern food-on-the-go retailer

Lindum has also carried out an extension to the Clydesmill Bakery at Glasgow and extended the Muffin and Cream Centre of Excellence at Leeds.

Lindum Contracts Manager Adrian Kelly said: “Working at Greggs has been one of my career highlights. The team is very professional and is able to make prompt decisions on a day to day basis, allowing site technical challenges to be resolved quickly.

“Peter has been especially supportive in getting us access to food production areas as these can be difficult to access, bearing in mind busy operations, food preparation regulations and staff procedures.

“While the job is progressing well, the start was hampered by the discovery of underground shifting sand strata, which required additional drainage work to be carried out.

“Carrying out a major build within a busy food production environment is always very challenging but the combined team effort between Greggs and Lindum has meant we’ve enjoyed the experience.”

Lindum has experience in the food sector and has successfully completed many factory projects. Most of the time, this has involved extension or refurbishment work taking place while production continues.

MD of Lindum Construction, Simon Gregory, added: “Our site managers are particularly good at building relationships with production managers and constant communications are so important in this sort of environment.

“Forward planning is critical to make sure we work round production requirements.”

Lindum will showcase its specialist construction skills to businesses in the food sector at Birmingham NEC next spring Representatives from its Lincoln, Peterborough and York offices will be among exhibitors at the 2021 Food & Drink Expo, which runs from April 12th to 14th. The Expo is part of the wider UK Food Shows event, which […]

We’re delighted to invite our Food sector customers, partners and friends to join us at our upcoming online Food Webinar. REGISTRATION CLOSED / LINK REMOVED RECORDING AVAILABLE BY REQUEST Time / date: 10.30am on Thursday 26th November by Zoom Normally hosted at our Business Park in Lincoln, this year we’re going online so we can […]

Lindum has completed a £700,000 upgrade of staff welfare facilities at a bakery in Bedford for international food manufacturer LantmÃ¤nnen Unibake. The work is part of LantmÃ¤nnen’s five-year business growth plan and has included new changing rooms, a new canteen and office suite refurbishments. The work was carried out by Lindum’s Peterborough-based construction teams and sits alongside […]

The development of a multi-million pound Food Enterprise Zone in south Lincolnshire will be discussed at a Food Industry breakfast briefing next month. The event, which takes place at the Lindum offices in North Hykeham on Thursday, 29th November, will explore the opportunities presented by Peppermint Park, in Holbeach. Once complete, the Food Enterprise Zone […]