HomeNewsDoors open to new development of homes in Ingham

Doors Open To New Development Of Homes In Ingham 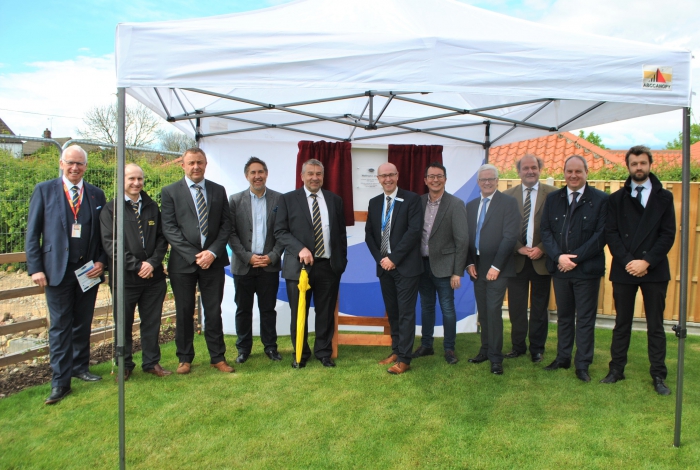 A development of 12 apartments built by Lindum for people aged over 55s has been officially opened in Ingham.

Wellington View, on Lincoln Road in the village, is the first of three new schemes to be completed in 2019 by Lincolnshire-based LACE Housing.

The new homes are specially designed for those aged 55 and over who have a connection to the area and residents began moving in at the beginning of April.

Nick Chambers, Chief Executive of LACE Housing, said: “It can be very easy for people to feel lonely and isolated as they get older and more vulnerable. Our local connection criterion helps to prevent this by allowing older people to remain within familiar surroundings and enjoy a higher standard of living without losing their independence.”

Lindum Construction began work on the £1.6m development in July last year. Managing Director Simon Gregory said: “The completion of Wellington View signals another milestone in our excellent working relationship with LACE Housing; together we are providing great retirement living homes for the over 55s in superb Lincolnshire villages.”

Wellington View was made possible thanks to a grant from the Government’s Homes England, as part of its affordable homes programme, with support from Ingham Parish and West Lindsey District councils.

Diane Krochmal, Lead Officer for Housing Strategy Coordination at West Lindsey District Council, added: “The ever-increasing ageing population in West Lindsey makes up a growing part of our housing market and the council is committed to ensuring there is a range of accommodation to address this.

“We recognise that – whatever the individual circumstances – appropriate safe, secure and affordable housing has a positive impact on both physical and mental health.

“LACE Housing is not only providing homes that enable people to live independently and safely but is doing so in a beautiful rural location.”

Dan Bailey, Director at engineering consultants Howard Ward Associates, said: “We are proud to have been involved in this project, working with LACE Housing and Lindum. We have a growing market in the Lincolnshire area and it’s great to be part of a scheme that is providing quality, affordable housing to the region.”

Wellington View was named by pupils from Ingham Primary School in recognition of the RAF Ingham site – which can be seen from the apartments – from where Wellington bomber planes were flown during the Second World War.

“We’re thrilled that children representing Ingham Primary School and Peter Heath from the RAF Ingham Heritage Centre were able to join us at the official opening ceremony,” said Nick. “We’d also like to thank the entire project team for their service and support as it wouldn’t have been possible without them all.”

Work has started on more than 60 new affordable homes on the edge of Sleaford. The homes are part of the wider Handley Chase development in the town and will be delivered by Longhurst Group. The Group, which owns and manages more than 23,500 homes across the Midlands and East of England and has offices […]

Lindum Group has finished work on a multi-million pound assisted living development in Whittlesey. The £9.3 million Willow Court scheme provides, being provided by Longhurst Group, consists of 47 one-bedroom and 13 two-bedroom flats for those over-65 who have a care need. Construction firm Lindum Group has now completed building work on the scheme, with […]

A development of affordable housing in Nettleham designed for over 55s and built by Lindum was officially opened during a ceremony hosted by LACE Housing. The Burrows, situated off Deepdale Lane in Nettleham, consists of 22 two-bedroom apartments for rent and 14 two-bedroom bungalows for shared ownership. It is the last in a trio of […]

Innovative construction techniques combined with a whole-team approach helped Lindum successfully complete its biggest ever building contract. The £17m Valentine Court development, off Tritton Road in Lincoln, was the most significant project the company has ever undertaken. It involved building 70 four-storey town houses for Castle Square Developments to accommodate 469 students from the University […]

History repeats itself with a focus on new shelter

Lindum teamed up with longstanding business partners Longhurst Group and YMCA Lincolnshire to mark the beginning of a new development – by recreating a scene from 30 years ago. The three organisations are currently partnering to complete what will soon be The Nomad Centre in St Rumbold’s Street, Lincoln. But back in 1989, they collaborated […]