HomeNewsHistory repeats itself with a focus on new shelter

History Repeats Itself With A Focus On New Shelter 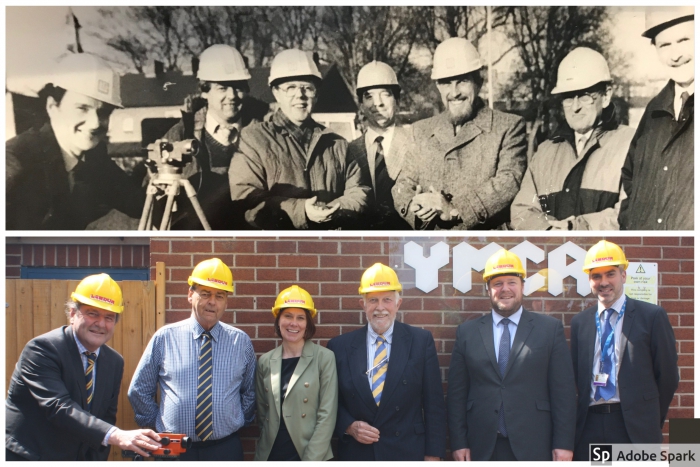 Lindum teamed up with longstanding business partners Longhurst Group and YMCA Lincolnshire to mark the beginning of a new development – by recreating a scene from 30 years ago.

The three organisations are currently partnering to complete what will soon be The Nomad Centre in St Rumbold’s Street, Lincoln.

But back in 1989, they collaborated to create an extension of the YMCA’s existing hostel accommodation and recently, an old photograph was unearthed of a “˜sod cutting’ ceremony at the time.

To mark the refreshed and revived relationship the team assembled to recreated a similar photograph at the same site.

Many of those pictured then are involved in the new development today.

David Chambers, now Chairman at Lindum Group, features in the old photograph in his role as Business Development Director. Mick Harrison, who was site manager at the time of the original photograph, has recently retired from the organisation. Freddie Chambers, who follows in his father’s footsteps as Business Development Director, joins the Lindum contingent in the present day photograph.

David Chambers said: “It’s really good to be back at the same site and in almost the same place to witness the next phase of YMCA’s work along St Rumbold’s Street.

“Having people like retired site manager Mick Harrison and Martin Hodgkinson, then chair of the YMCA, all on hand, alongside the new CEO Caroline Killeavy and Lindum’s current Business Development Director, my eldest son Freddie Chambers, was a real treat and a trip down memory lane.

“We are delighted to be involved once more in the YMCA’s incredibly important service to the people of Lincoln and Lincolnshire.”

Caroline Killeavy said: “We thought it would be great fun to recreate the original photo but it also has a deeper significance behind it too.

“It might have been 30 years since the original photograph, but it’s a sign of our ongoing commitment to collaboration in our city that three prominent Lincolnshire organisations are still working together like this, on a mission to positively affect our communities in need.

“The new photograph will form part of the rich and diverse history record of YMCA Lincolnshire which celebrates its 150th year this year.”

Completing the photo is Ian Penn, Development and New Business Manager at Longhurst Group, who stands in place of Alan Whyte, the Group’s former Development Director.

Ian Penn said: “We are delighted to have helped YMCA secure funding from Homes England and be project managing the development of such a fantastic and much-needed facility.

“Recreating the original photo, 30 years on, illustrates the strength of the enduring partnerships that Longhurst Group enjoys with both YMCA and Lindum. We are delighted to be working together once again to improve the lives of people who will benefit from this new centre.”

The St Rumbold’s Street site is well on the way to being transformed into a purpose built centre, including emergency accommodation and essential day services for the most vulnerable people in the city.

The scale of the work can be seen from the roadside, with scaffolding around the site and walls being removed to make way for the new services. The project is due to be completed in autumn this year.

Work has started on more than 60 new affordable homes on the edge of Sleaford. The homes are part of the wider Handley Chase development in the town and will be delivered by Longhurst Group. The Group, which owns and manages more than 23,500 homes across the Midlands and East of England and has offices […]

Lindum Group has finished work on a multi-million pound assisted living development in Whittlesey. The £9.3 million Willow Court scheme provides, being provided by Longhurst Group, consists of 47 one-bedroom and 13 two-bedroom flats for those over-65 who have a care need. Construction firm Lindum Group has now completed building work on the scheme, with […]

A development of affordable housing in Nettleham designed for over 55s and built by Lindum was officially opened during a ceremony hosted by LACE Housing. The Burrows, situated off Deepdale Lane in Nettleham, consists of 22 two-bedroom apartments for rent and 14 two-bedroom bungalows for shared ownership. It is the last in a trio of […]

Innovative construction techniques combined with a whole-team approach helped Lindum successfully complete its biggest ever building contract. The £17m Valentine Court development, off Tritton Road in Lincoln, was the most significant project the company has ever undertaken. It involved building 70 four-storey town houses for Castle Square Developments to accommodate 469 students from the University […]

Doors open to new development of homes in Ingham

A development of 12 apartments built by Lindum for people aged over 55s has been officially opened in Ingham. Wellington View, on Lincoln Road in the village, is the first of three new schemes to be completed in 2019 by Lincolnshire-based LACE Housing. The new homes are specially designed for those aged 55 and over […]