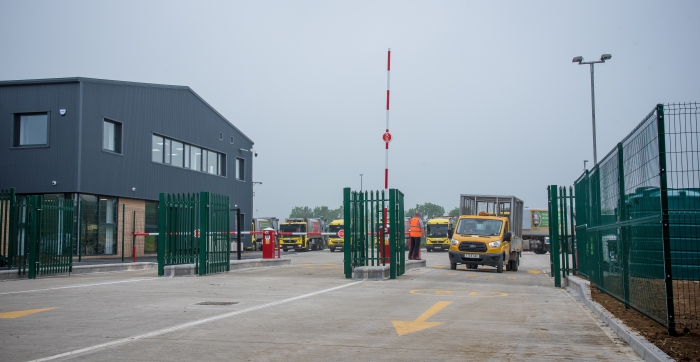 Lindum is delighted to have completed a new state of the art waste and recycling depot for North Kesteven District Council.

The building has a built-in rainwater harvesting system to cut down on water use for cleaning the fleet of vehicles and has a modern, fully kitted servicing bay.

“As a Lincolnshire-based construction company, it is incredibly satisfying to work on something which will make a real difference to the local community.

“It is also rewarding to provide much-improved facilities for people who deliver such an important service to thousands of households.

“In addition to the depot building, the business units will enhance the commercial offering in this part of North Kesteven and we were proud to discover that the project has been nominated for an award in the NK Building Excellence Awards, which take place on June 7 in Sleaford.”

Each year, the council collects around 3.4 million general waste, recycling and garden waste bins. This is set to increase as more homes are built in the district.

Based on Scoley Court, the site has been named in recognition of the family of that name who had resided in the village since before World War II, and who saw their land used as airfields by Bomber Command.

Zena Scoley was the first ever woman leader of Lincolnshire County Council, honoured by Her Majesty the Queen with an MBE and made Deputy Lord Lieutenant of the County.

David Steels, Head of Environment and Public Protection, said: “This has been a timely investment by the Council, demonstrating its support for both housing and business growth across the District.

“It is clear that people appreciate the waste and recycling services now and we are determined this will continue in the future. More houses are going to be built across the District following the adoption of the Central Lincolnshire Local Plan and it’s important to ensure the services the authority provides alongside this are of the highest standards.

“Not only do people need homes to live in, they also need places to work which is why the Council has continued its commitment to supporting the local economy by creating seven new workshops in Metheringham. It’s also great to see businesses from the Moorlands Trading Estate move into these units, meeting their expansion ambitions.”

The former depot on Sleaford Road is due to be demolished in the near future.