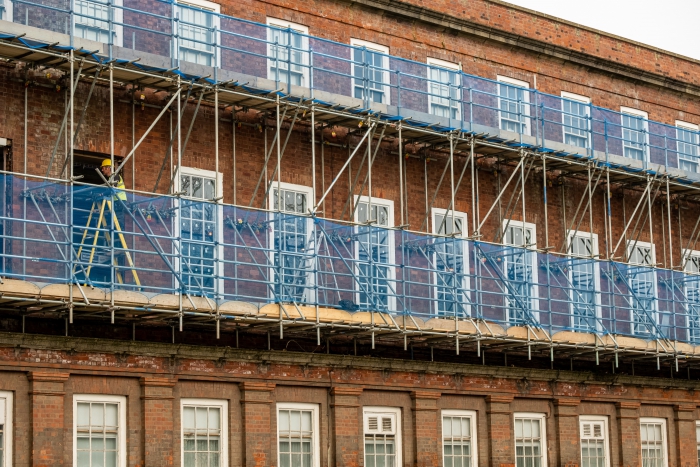 Experts in heritage joinery have been commissioned to create 42 replacement windows for an industrial building in Lincoln city centre.

It is part of work to transform redundant space into new offices, which will become home to employees moving from its Firth Road site.

Lindum was appointed to renovate the building and work will involve refurbishing the first and second floors while installing M&E infrastructure on the third floor.

The building was built in the 1800s as an engineering factory assembly hall. It consists of a number of interlinked solid brick sections and has previously been home to Alstom Gas Turbines and Ruston Gas Turbines.

It is classed as being of Specific Heritage Interest, due to the role it has played in Lincoln’s manufacturing industry.

The construction team’s colleagues in Lindum Joinery were called upon to replace the windows due to their extensive expertise in heritage work, particularly the repair and maintenance of old frames.

“We have stripped out the old frames and are half way through replacing them along the upper floors of the three storey building,” he said.

“The new frames are being crafted from sapele hardwood, which was chosen for its durability, and the glass will be double glazed.

“It is important that we retain an authentic look as the building is in the eye line of the Cathedral. We have been working closely with the local heritage officer to get the look right.”

This work comes on the back of Lindum’s involvement in Lincoln’s Sincil Street redevelopment. There, the Joinery team have replaced 13 shop fronts in an attempt to bring the street back to its original Victorian appearance.

Siemens previously revealed it is planning to leave its Firth Road site with 120 employees moving across the city to the main Ruston Works as part of a £6.5 million investment in improved facilities.

The Siemens global research and development team has been based at the Firth Road site since the 1970s. They are responsible for developing the next generation of small gas turbines,

Lindum’s work at Siemens is expected to be completed early next year.

Mark Speed, Managing Director, Ruston Works, Siemens Energy Ltd, said: “The heritage of the Ruston Works is very important to the history of Lincoln. As a prominent industrial building right in the city centre, it was important we maintained the authenticity of such an important building. We are pleased the skills to complete such an important job were available in Lincoln.”