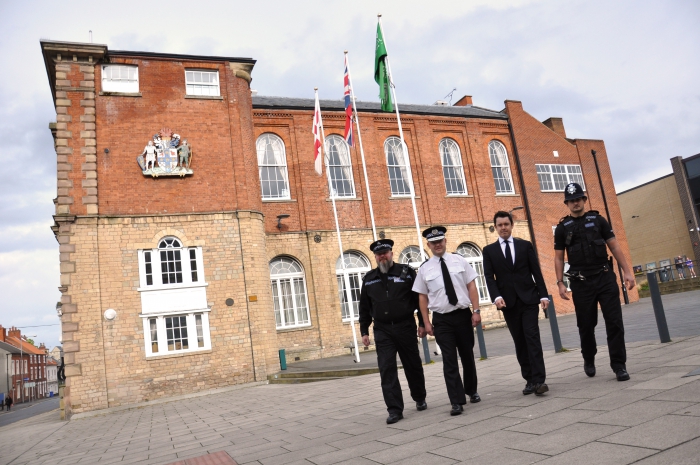 Lindum Group is delighted to begin construction work on a new home for Nottinghamshire Police.

The force is moving in with Bassetlaw District Council as part of a local restructure in the town of Worksop.

The move, which will see police share Queen’s Buildings with the council, is designed to save money while increasing officer presence on the streets.

The building project is the first to commence through Scape Group’s new Regional Construction framework, a four year framework which operates across the Midlands and East of England.

Lindum Group will be creating new station facilities for the force, including a front desk, vulnerable victims’ suite and interview rooms.

Lindum Framework Director Phil Sidebottom said: “We are delighted to be working with Nottinghamshire Police on this relocation project.

“Lindum has an established history of working with public sector clients and we fully appreciate the pressures they face, particularly when they are spending tax payers’ money.

“Our team has experience on working on “˜live’ sites such as this, where it is vital to keep the building open and operational for the other tenants.”

Chief Constable Craig Guildford said: “Sharing facilities with Bassetlaw District Council means that Nottinghamshire Police will have less square feet, but more on the beat. That’s what I want and that’s what the public want. We are not just maintaining our local policing presence but increasing it.ã€€

“We now have an additional dedicated police officer for Worksop Town Centre who has been in post since January and three new PCSOs. A new CID unit will also move in once works have been completed too, followed by a new Schools Liaison Officer in September.

“I would like to thank local politicians and in particular Cllr Simon Greaves, John Mann MP and PCC Paddy Tipping whose collective challenge and support has assisted myself and the Local Authority Chief Executive to deliver a great outcome for the good people of Bassetlaw.”

Lindum Group is Scape’s delivery partner for projects up to a value of £750,000 within the framework’s North East Midlands region, covering Lincolnshire and Nottinghamshire. Lindum Group was appointed to the framework following a rigorous selection process.

Victoria Brambini, Managing Director of Scape Procure, commented: “We are very excited to see our first Regional Construction framework project start work on site. Through our framework, Lindum and Bassetlaw District Council can collaboratively build a new base for Nottinghamshire Police in a cost effective and timely manner, whilst engaging with the local suppliers throughout the process.  The new facilities will play an important part in improving services for the public and essentially keeping local communities safe.”

Cllr Simon Greaves, Leader of Bassetlaw District Council, said: “We are delighted to be working closer with Nottinghamshire Police and as part of this relocation, have been able to secure the appointment of additional officers who are already walking the streets of Worksop, as well allowing a number of other positions to be brought back to the town.

“This is an extremely positive move for both the Police and Bassetlaw District Council and will further enhance the services we are able to offer Bassetlaw residents in Queen’s Buildings as part of our One-Stop service that currently includes the Department for Work and Pensions, Citizens Advice and 2 Shires Credit Union.”

Paddy Tipping, Nottinghamshire’s Police and Crime Commissioner, said: “All public services will continue to face significant financial challenges in the future and working more closely with our partners, like this, is a logical step that delivers economic savings while providing better facilities for the public.

“It’s police officers and staff who keep our communities safe, not buildings. By working with our local authority partners, we are creating an efficient, fit for purpose and sustainable estate that helps to improve services and deliver value for money across the board.”

The relocation is in response to the Government’s reductions in police funding, which has hit Nottinghamshire particularly hard with £56m of cuts completed to date and a further £12m required to meet their target.

Work on the dedicated offices at Queen’s Buildings is expected to start imminently with Nottinghamshire Police planning to move into its new Worksop home later this year.

The relocation plans follow a successful move for Nottinghamshire Police based in Retford from their former station to the council’s One-Stop-Shop in the Town Hall.