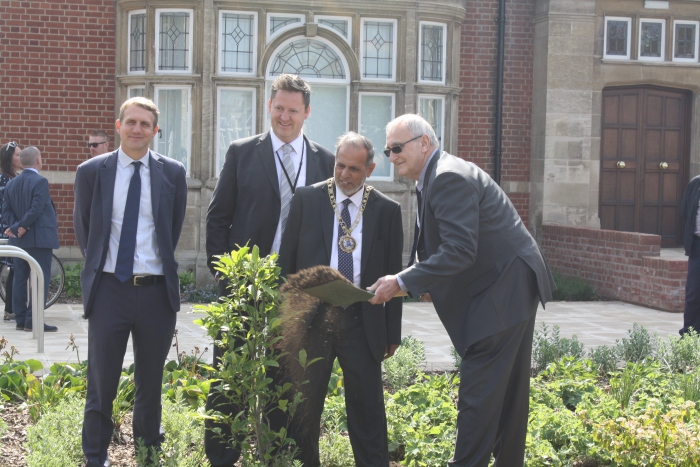 A tree planting ceremony was held to mark the completion of 31 new affordable homes in Peterborough city centre.

Lindum built the houses on behalf of social housing provider Accent and they are now occupied by local families who had been on Peterborough City Council’s housing waiting list.

The £3.5 million project involved renovating the Grade II listed Manor House to build 11 one and two-bedroom apartments. 20 more new homes have been built from the conversion of what were Accent’s former offices, and a new building in the former car park.

Accent Chief Executive Paul Dolan said he was delighted with the redevelopment.

“At the time of moving out of Manor House in 2017, we resisted many offers to sell the building,” he said.

“Instead, we worked with our partners Peterborough City Council and Lindum to provide new, good quality, affordable homes for local people in need. It’s been a great project to work on and it’s fantastic to see these homes now finished, looking so good and occupied by happy families.”

The homes are in a mixed residential and commercial use area known as “˜The Park’ Conservation Area and the “˜City North’ Peterborough City Centre Development Plan area. Manor House is listed as a building of Local Historic Importance so Accent and Lindum worked closely on keeping many of the original features.

The location of the site provided some interesting challenges, as it was close to the city centre, with tight access and with very little parking for deliveries or contractors. However, the end result, particularly within the Manor House part of the project, is striking.

“It’s a fantastic building with some lovely features and it’s rewarding to see it brought back into use in such a valuable way. The new buildings have been developed on land that was a car park for the old offices and we’ve used a mix of materials and landscaping to ensure it blends in with the older buildings.”

Lindum, which has offices in Newark Road, employs around 60 people in Peterborough, and used local suppliers and contractors on the project in addition to its own staff.