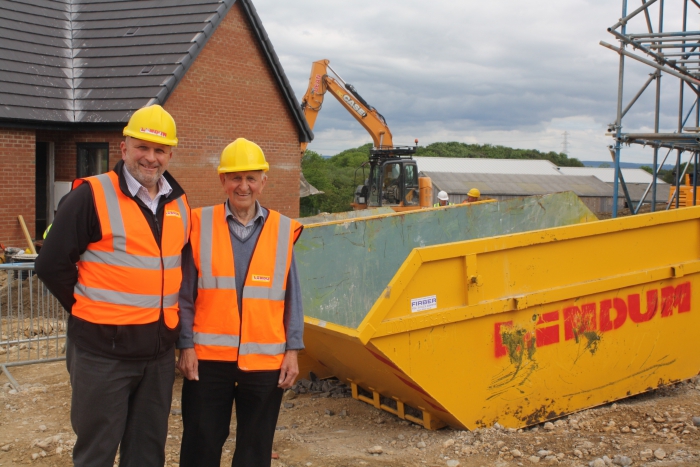 Builders on a site in Malton have befriended a local pensioner who visits them every day to learn about construction.

John Pinkney (83) became friends with the team at the Lindum site in Rainbow Lane after regularly stopping to chat about the ongoing development with site manager Duncan Hawthorne-Robson.

The construction team often make Mr Pinkney cups of tea in the site office and have helped him out by driving him to doctor’s appointments. The team even called at his home to check he was ok when they hadn’t seen him for a few days.

Lindum is currently building 56 affordable homes in Malton for Yorkshire-based housing association Broadacres. John, who was born three miles away and who completed National Service before working for the electricity board, said he loves his daily visits to site.

“I like meeting people and so when they started on site here, I came down to see what was going on. Everyone has been really friendly.

“I’ve always been interested in building sites, even though I’ve never worked in construction. They’ve shown me the plans of what they are doing and tell me how it’s all happening. I didn’t realise there was so much to it.”

When John failed to visit over Christmas, Duncan went around to his home to check he was ok and it turned out he had fallen ill and was taken into hospital for a few days.

When he returned home, the team had a whip round to buy him a slow cooker and a few essentials to help his recovery.

“They are really nice lads. It was very good to get the presents at Christmas. They have helped me as much as they can, which is really nice of them,” added John, who has two children and two grandchildren.

“They also helped me when I had my cataracts done by getting me to my hospital appointments.”

Duncan said he was delighted to welcome John to the site.

“He’s great! It’s been fantastic getting to know him,” he said. “We are more than happy to make him a cuppa at break time and tell him what we are doing and how the project is going.

“He’s a real character in the local area and he looks after many of the other older people in the community.

“He’s genuinely interested in what’s going on here too. We chat about the progress of the job and the way we are working and he’s really keen to understand it all.”