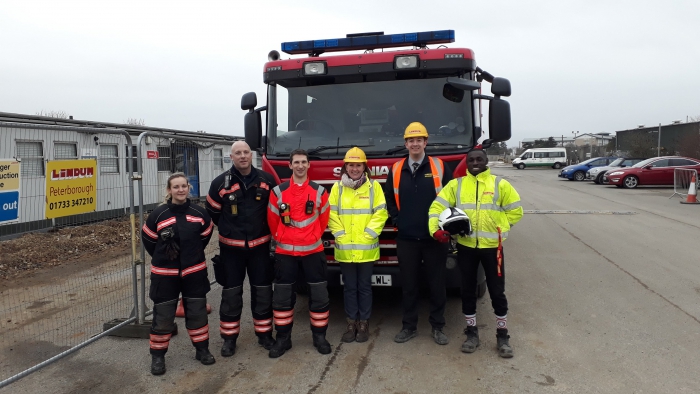 Fire crews staged a mock rescue at disused office buildings in Peterborough as part of an unusual training exercise.

Crews from Stanground and Dogsthorpe stations battled their way through the smoke-filled units, which are due to be knocked down in the coming weeks.

It gave firefighters experience of carrying out search and rescue exercises in an unfamiliar environment.

The exercise was arranged by construction company Lindum, which has been appointed to build a new £3m office block for GB Railfreight at the site.

Lindum General Manager Darren King said: “We were contacted by the fire service to see if we had a building that might be suitable for training. We knew the crew as we had previously completed building work at their station and the service HQ so we were happy to help them out.

“It was fascinating to watch them in action on the day. They filled the rooms with thick smoke and planted two dummies inside – one adult size and one infant size. Using their breathing equipment and a machine that helps them to navigate, they had to search for the dummies.
“We were invited in to the building once the training was over and it was impossible to see anything with the naked eye. It really brought home what a tough job they face when they head into buildings in an emergency.”

Stanground fire station is one of two wholetime stations in the Peterborough. It is staffed 24/7 by four teams of firefighters – Green, Red, Black and White watches.

Firefighter Chloe Howells who organised the training, commented:  “We’re really grateful to Lindum for allowing us to have that opportunity to train on their sites. We gain so much from training in different types of buildings and locations. It really helps improve our skills and ensures we’re always prepared for any emergency we’re called to.”

Not-for-profit businesses across Lincolnshire are being encouraged to register themselves on a new national database which showcases their services to potential buyers. The Social Partnership Portal is a free online platform for organisations with a social or environmental purpose. It enables them to advertise what they do, where they operate and the benefits they bring […]

Lindum York has raised £500 for a charity which offers support to hospital patients across Yorkshire. The money was donated to York Hospital in recognition of the care it is giving to a Lindum employee’s family member. Contract Manager Adrian Kelly chose to support the York Teaching Hospitals Charity as his wife June is currently […]