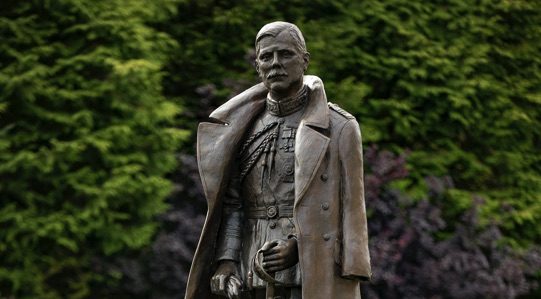 It is a permanent reminder of the first 100 years and encapsulates how important and significant Lord Hugh Trenchard, MRAF was and is to RAF College Cranwell
Group Captain Gordon Bettington | Deputy Commandant and Station Commander
RAF College Cranwel

Builders from Lindum were honoured to install a statue of Lord Hugh Trenchard, Marshal of the Royal Air Force, at RAF College Cranwell in Lincolnshire.

The seven feet tall statue, cast in bronze by established artist and sculptor Vivien Mallock, was commissioned by the Cranwellian Association to mark the college’s 100th anniversary.

It was erected on the west side of College Hall Officer’s Mess following 18 months of fundraising by Sir Christopher Coville, Chairman of the Cranwellian Association Executive Committee.

Lord Trenchard established the college in 1920 as part of his plans to expand the air force following the First World War. The facility became the first military air academy in the world.

Donations to help cover the cost of the statue were made from Cranwellians across the world.

Watch a video of the installation here.

Deputy Commandant and Station Commander RAF College Cranwell, Group Captain Gordon Bettington said: “We are absolutely delighted and grateful to see 18 months of work by the Cranwellian Association come to fruition with the installation of this incredible work of art.

“It is a permanent reminder of the first 100 years and encapsulates how important and significant Lord Hugh Trenchard, MRAF was and is to RAF College Cranwell. His legacy will live on in the hearts and minds of all those who enter the RAF Officer Training Academy”.

Artist Vivian Mallock has completed a number of original sculptures of military figures in the past. Among her best-known pieces is a memorial to the men of the Royal Tank Regiment, unveiled by The Queen in 2001, which stands in Whitehall and depicts the five-man crew of a Comet tank.

She was also the last artist to complete a portrait sculpture of Queen Elizabeth, The Queen Mother.

The installation was orchestrated by Lindum maintenance manager Chris Turner. He said: “We were approached by the Cranwellian Association to ask if we could prepare the foundations and the stone plinth for the statue. We then organised the mounting of the sculpture.

“It’s a really impressive piece and it’s an honour to be involved in helping to mark 100 years of Air Force training.”