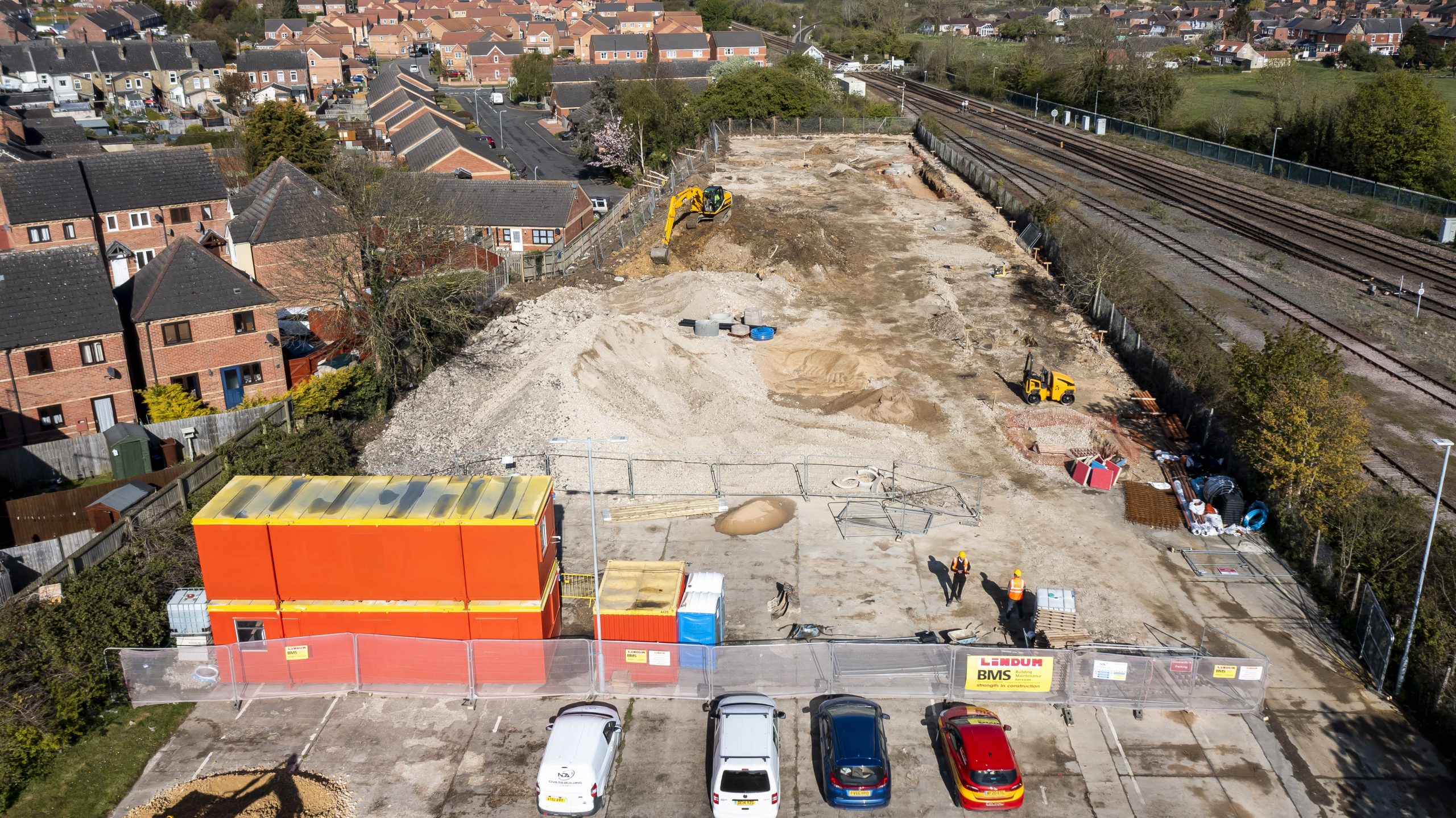 The properties are being built on behalf of North Kesteven District Council on land near its car park in Grantham Road.

Excavations have begun to allow access for more services on site and existing concrete has been crushed ready for re-use.

The council car park will remain open throughout the construction period and signage has been installed to ensure safe access to and from vehicles while the work is taking place.

Lindum contracts manager Paul Jenkinson said the site used to be home to a fertiliser factory many years ago.

“We started by removing the old concrete, which was crushed onsite and is now being recycled as hardcore for the new roads and paths,” he said.

“We are also building the homes to the Fabric First standard, which means they will be more environmentally friendly. They will be super insulated and have triple glazed windows, which will ultimately make them cheaper to live in too.

“We expect the project to take about 44 weeks in total so we should finish the work in February next year. At the moment we are constructing the roads and the actual houses will begin to take shape in the middle of July.

“Once complete, the homes will be offered to people on the council house waiting list.”

The site is owned by North Kesteven District Council, and Leader of the Council Cllr Richard Wright said: “There have been challenges for us to overcome in developing this site because of its previous uses and the general difficulties caused by the pandemic.

Work to build 156 new affordable homes in Silsden, West Yorkshire, is now underway. Lindum York, based in Elvington, is building the homes on behalf of Yorkshire Housing. So far, the site has been cleared, ground works have been carried out and Plots 1 and 2 have started to take shape. Once complete, the development […]

Work to build 33 new affordable homes in Heckington, near Sleaford, began on Monday (January 25th). Lindum Construction is building the properties on land off Kyme Road on behalf of North Kesteven District Council. Once complete, the development will consist of eight one-bedroomed flats, 16 three-bed houses and nine two-bed houses. Each home will have […]

Lindum has completed construction of five new affordable homes at Swift Gardens on behalf of City of Lincoln Council. Work on the two-bed, four-person family homes started at in February with the demolition of the old Markham House building. Now they are complete, they will be let by the council at an affordable price and […]

Plans are being drawn up to build 53 affordable homes on an empty field off Brant Road in Waddington.

Local construction company Lindum and Lincolnshire-based housing provider Longhurst Group are behind the proposals, which were unveiled this week.

Plans for 64 new affordable homes on the edge of Sleaford have been submitted to North Kesteven District Council. Construction company Lindum Group and housing provider Longhurst Group are seeking permission to build the houses, which would sit in the wider Handley Chase development. Thirty of the homes would be offered for sale on a […]

Construction of 46 new homes near Grantham is now under way

Lindum has been appointed by Longhurst Group to build affordable homes on a site off Easthorpe Road in Great Gonerby. They will be available on a mix of housing tenures, including Shared Ownership, Affordable Rent and Rent to Buy. Building work began at the end of July and the project is expected to take just […]

Lindum has started work on 36 new homes on the site of a former hospital in Spalding.

Work has been completed on 36 new homes on a famous site in Lincoln.

Lindum has completed work on 36 new homes on the site of on old dairy in Lincoln.

Keys to the new properties were handed over to housing provider Longhurst Group on Tuesday, 14th July.

Residents have begun moving into a new £7.8 million affordable housing scheme which was built by Lindum in a popular North Yorkshire market town.

Developed by Broadacres Housing Association in Malton, the homes are being allocated to people with a connection to Ryedale, as part of its strategy to ensure that rural communities remain affordable for future generations.