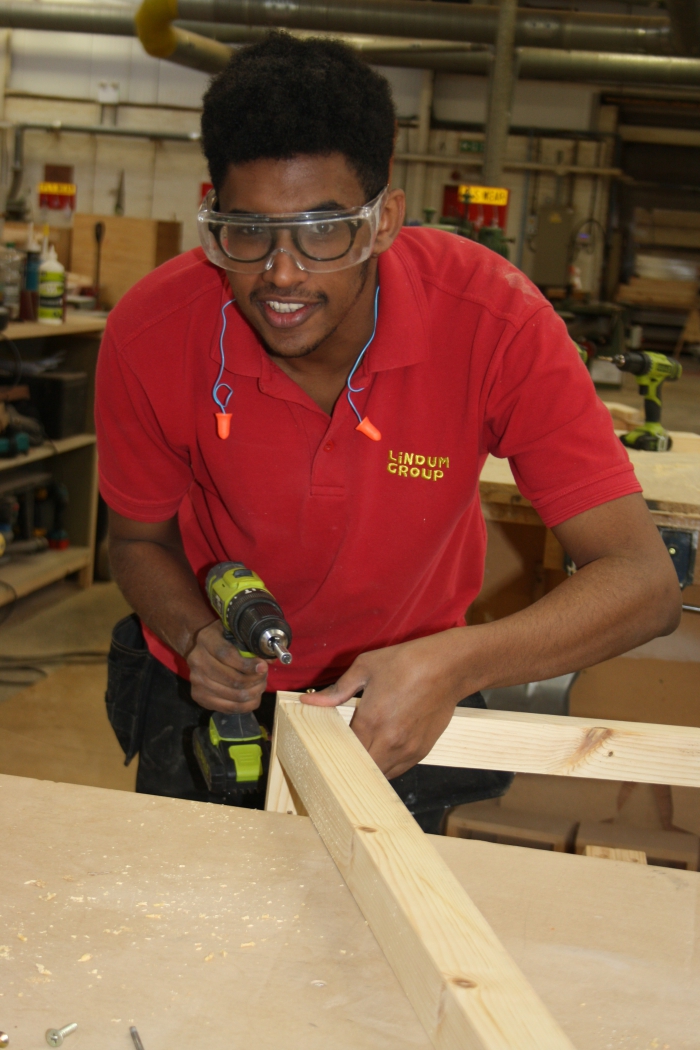 Construction industry trainees and apprentices are being given the chance to learn their trade while working on one of Lincoln’s most significant building projects.

Joiners, bricklayers and groundworkers are among those honing their craft on site at Sincil Street and The Cornhill in Lincoln.

In addition, trainee site managers, quantity surveyors and estimators have also been offered the chance to work on the project, which is transforming an historic part of Lincoln city centre.

Their role in the work is being highlighted as part of this year’s National Apprenticeship Week, which runs from the 4th to the 8th March 2019.

In Lincoln, Lindum is working with Lincolnshire Co-op to restore and renovate the city’s historic Cornhill quarter. Part of the work involves Lindum’s Joinery division producing replicas of the original Victorian windows and shop fronts in Sincil Street.

Among those who worked on this part of the project was Robbie Michael, who was an apprentice joiner based in the Joinery workshop at the Lindum Business Park in North Hykeham.

He said: “At first I was involved in a few smaller jobs, such as getting the timber out and covering up the screws that the other joiners had put in,” he said.

“Eventually I got to work on some of the larger frames and was helping to cut the timber using the machines in the workshop. The structures were so big it was a two person job.

“I feel really proud of the fact that I’ve worked on the Sincil Street project. It’s bizarre to think that the shop fronts will be there long after I’ve gone and that I’ve helped, even in just a small way, to create a new chapter in Lincoln’s history.

“If I hear people talking about the Cornhill project, I feel proud to have been involved and to have worked in the team that delivered it.”

Elsewhere on the project, groundworks and bricklayers have been involved in the practical construction process.

Lincolnshire Co-op is behind the Cornhill regeneration project and Ursula Lidbetter, Lincolnshire Co-op CEO said: “We are pleased that a number of apprentices have been involved in The Cornhill Quarter development and fully support this initiative by our contractor, Lindum.

“Lincolnshire Co-op also has a well-established apprentice programme so it is great that through this development the project team has been able to support young people in training and development.”

The 12th annual apprenticeship week has been given the theme “˜Blaze a Trail’ to demonstrate the benefits of apprenticeships to employers, individuals, local communities and the economy.

Apprenticeships and Skills Minister Anne Milton said: “Blazing a trail is what being an apprentice is all about and will be our theme for National Apprenticeship Week 2019. Because that’s what’s happening up and down the country – apprentices and employers blazing a trail.

“I want everyone to recognise the change that apprenticeships can bring – for employers blazing a trail to new markets, apprentices to new career opportunities and for colleges and training providers raising the skills levels for everyone.”

Keith Smith, director, Education and Skills Funding Agency said: “I want the 12th annual National Apprenticeship Week to be the biggest and most successful, yet.

“The theme for this year: Blaze a Trail is at the heart of what apprenticeships are all about. I really hope our partners feel as excited about it as we do and, like previous years, they will can get fully behind the Week.

“We want everyone to consider hosting an event or activity so more people get to see and hear about the huge benefits apprenticeships can bring to employers, individuals and local communities.”

Trainee Lindum joiner Katie Hughes was crowned Apprentice of the Year at the Greater Lincolnshire Construction and Property Awards. Katie was chosen as joint winner in the category, which recognises young people who have made an exceptional start to their careers. It recognises the quality of her work, her commitment to learning and the impact […]

Lindum Homes is delighted to welcome Bricklayer Scott Evans as a permanent member of its team after he successfully completed a three year apprenticeship with Lindum Group. Scott finished his course and gained an NVQ at the end of June and is now working full-time at The Paddocks, Lindum Homes’ development in the village of […]