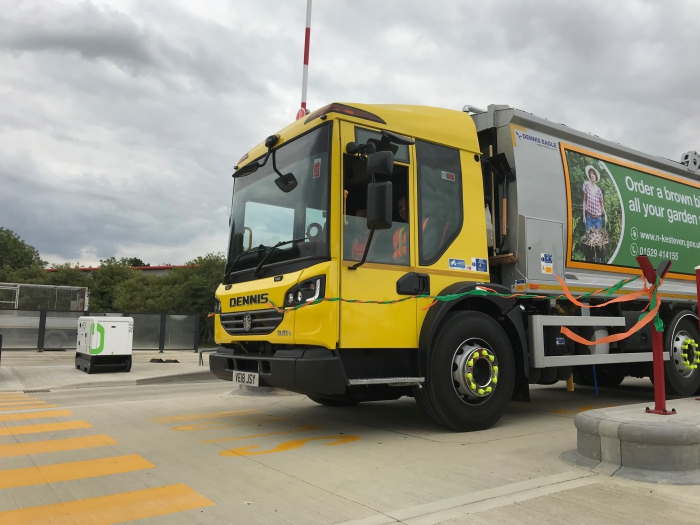 The completion of North Kesteven District Council’s new £4.2 million waste and recycling depot and business units has been marked with the official opening of the site.

The new facility, on Scoley Court in Metheringham, provides a four-fold increase in accommodation, in a yard that’s four times larger than the previous depot on Sleaford Road.

Finished to an exceptionally high standard by Lindum, the depot also benefits from solar panels to help keep its carbon footprint low and a rainwater harvesting system to help reduce the amount of water used to clean the vehicles.

Alongside the depot, Lindum has built seven new workshops, continuing the council’s commitment to supporting the local economy and enabling business to grow. This adds to its portfolio of 110 units across the district, which enjoyed a 97.6 per cent occupancy rate in the last year.

Planning permission for the site was granted in 2016, with work getting under way last summer.

Councillor Richard Wright, Leader of NKDC, said: “It is a remarkable achievement that from ground clearance to functional operation delivery has taken only a year, which is testament not only to the Council’s determination to provide high quality services for its residents and its commitment to investing in the district, but also to the dedication, professionalism and resolve of all involved in the project’s fulfilment.

“The former depot on Sleaford Road, Metheringham, had served the district well for 40 years, but it was bursting at the seams as growth potential, and the urgency of preparing for such growth, needed to be addressed.

“Ever mindful of the needs of growing businesses for grow-on space it was a natural extension of our needs to accommodate seven adjoining business units within the £4.2m project.

“As such, this new depot futureproofs not only our own waste and recycling operations over the next 25 years, and prepares for the emerging Lincolnshire Joint Waste Strategy, but also develops business resilience and provides much needed infrastructure for the implementation of the Central Lincolnshire Local Plan.

“As a council we are committed to growing the local economy, supporting thriving businesses, creating jobs for people who live in North Kesteven and strengthening our Flourishing Communities.”

Lindum was the council’s chosen contractor for delivering the new depot and business units.

Director John Howard said: “It’s incredibly satisfying to see a project like this come to fruition. As a Lincolnshire construction company, we are very happy to have been involved in something that makes a genuine difference to our neighbourhood.

“Those who work out of this depot provide a vital service to the people of North Kesteven and it is great to see how pleased they are with their new and improved facilities – which were completed using local labour.

“A proportion of our 640 employees live in North Kesteven and will benefit directly from this project.”