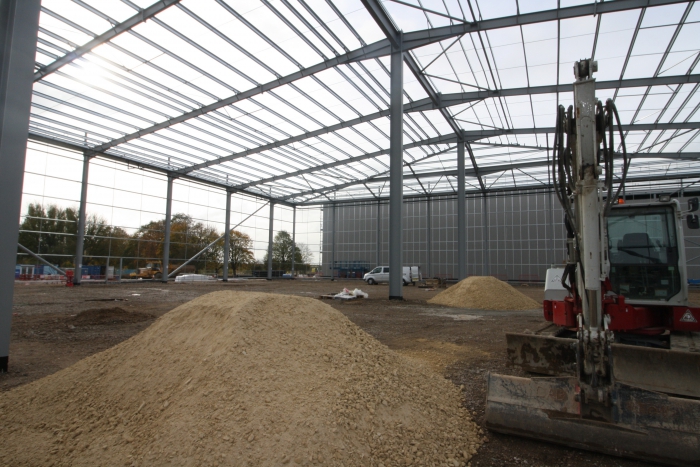 Work to build two industrial units on land off the A46 near Lincoln is on course to be completed by March 2019.

Lindum is building the units at Network 46, in Witham St Hughs, on behalf of developer and regeneration specialist, St. Modwen.

North Kesteven District Council approved plans for the development earlier this year. It will create more than 95,000 sq ft of warehouse and manufacturing accommodation within one of the region’s main strategic employment locations.

Robert Richardson, Senior Development Manager at St. Modwen, said: “We are really pleased with the progress being made on-site. This is currently the only speculative scheme of this scale on-site in Lincolnshire and will provide the much needed employment space across the region.”

Lincoln-based Banks Long is marketing the scheme with Cushman and Wakefield.

William Wall of Banks Long said: “This is prime space in a strategic location. Its proximity to the A1 corridor ensures its unrivalled connectivity. The power capability is also a key driver for the initial interest received from occupiers.”

Lindum Construction Manager David Frankish said: “The project is going well and that it’s on target for completion in March.

“The aim is to get the shell of the units completed and weather tight as soon as possible. Then we will move on to the rest of the project and the amount of labour we have on site will increase.

“So far, things on site have progressed incredibly well and we are on schedule for our target completion date.”

Planning consent had originally been granted for more than 960,000 sq ft of commercial space on the 70-acre Business Park, part of which has been developed with occupiers including Apogee, Turbine Efficiency, UK Mail and DPDUK. St. Modwen’s plans include 830,000 sqft, including this current phase, across the 45 acres of remaining development land.

Network 46 is located in Witham St Hughs, Lincolnshire, on the A46 dual carriageway giving excellent access to the East Coast sea ports, airports and the national motorway network. The A1 is only 8 miles from Network 46.