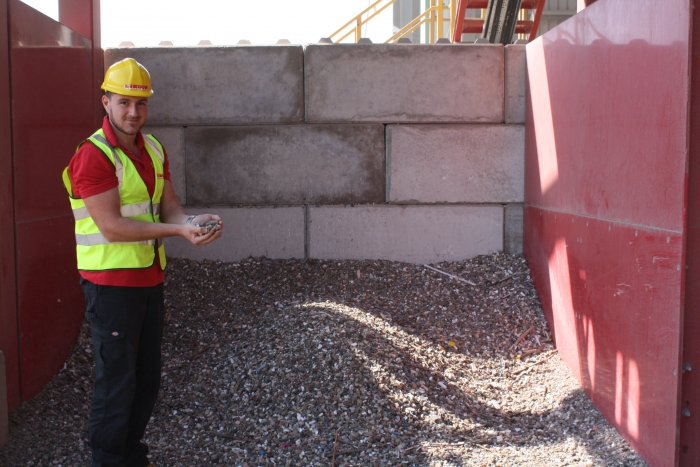 Lindum has invested £275,000 in a bespoke waste sorting device which will reduce the amount of rubbish it sends to landfill.

The company’s Saxilby-based recycling centre has purchased an air density separator, nicknamed a Zig Zag machine, which helps to separate valuable pieces of stone from other waste particles.

The purchase is expected to reduce the amount of trommel fines sent to landfill by 48 per cent  – meaning Lindum will now be able to recycle the majority of the waste it processes.

It is also expected to save the company around £113,000 in landfill charges each year while potentially generating a sales income of around £64,000, thanks to the market value of the stone.

The machine – officially called the ZAC800 Zigzag Air Classifier – was built by Impact Air Systems, based in Leicester in conjunction with specialist consultant Chris Pearson, from Prostar Recycling Machinery and commissioned by Tong Engineering of Spilsby.

It was purchased and installed prior to the Coronavirus lockdown.

Lindum Waste’s Development Coordinator David Sullivan and Yard Foreman Paul Sullivan came together with the idea of purchasing the machine after being tasked with reducing the company’s landfill bill.

“The machine processes a waste called trommel fines, which are basically a by-product of waste from our skips and waste vehicles after passing through a trommel screen,” David said. “We produce about 400 tonnes of this a week and until now we had no choice but to send this to landfill.

“The process starts with a Vibraplant vibratory screen – which is like a big sieve – that separates the trommel fines taking the smaller materials out before passing into an Air Classifier.

“The larger material then moves into the Air Classifier and down through the zigzag shape cascade before the powerful vacuum sucks the light weight material, including polystyrene and wood fragments, upwards leaving the heavier valuable stone to be collected in a pile underneath. This stone can be sold for between £8 and £18 a tonne. It can even be used by Lindum’s construction teams as pipe bedding.

“It was important that we invest in this machine now. Not only will it improve our recycling rates, it will also benefit the business as landfill charges go up and landfill sites close down.”

The machine configuration was designed by Chris Pearson especially for Lindum Waste.

Chris, MD of Prostar Recycling Machinery, which is based near Boston, said he was approached by Lindum as he had worked with the team at the Saxilby site before.

“David called me to see if there was anything I could suggest that would help with cutting landfill charges,” he said. “It is a very common concern in the recycling industry at the moment and everyone is looking at ways to reduce their bill.

“In the end, the machine we designed is a combination of a number of different parts, with the Impact Air Zig Zag function being the main operating system.

“I designed the system configuration and then the parts were assembled and installed by Tong, based in Spilsby.”