Store To Open Doors After Major Refurbishment By Lindum 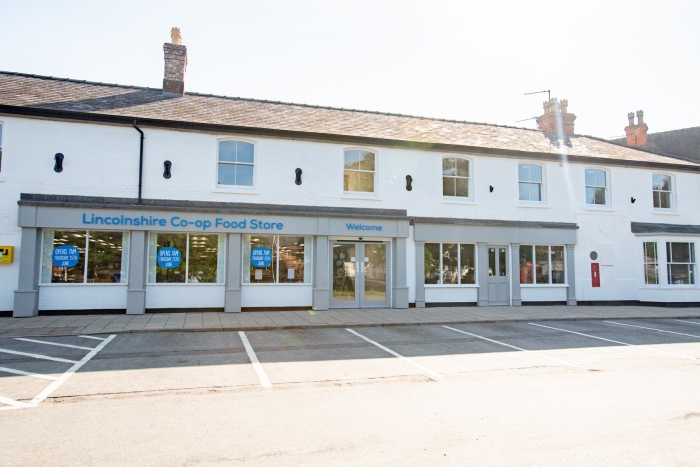 Lindum has completed the extensive renovation of a Lincolnshire food store, including restoration of the shopfront to complement its historic surroundings.

The £1.5m scheme saw part of the structure rebuilt to create a traditional-style wooden shopfront, reintroducing windows that had been bricked up.

The roof has been retiled with the original slate and a chimney stack has been restored.

Work has also included a revamp of the neighbouring unit, which has had a bay window installed to replicate how the building would have appeared in the 1920s.

Inside, the store has a fresh, modern look and an improved layout for shoppers. There’s new fixtures and fittings and more space for chilled foods. The outlet has an instore bakery, Costa Coffee machine and an ATM.

Tattershall Food Store closed down in January and the team of colleagues were redeployed into other outlets while the work took place. Store Manager Sarah Hutt said the team were looking forward to getting started when it reopens this week.

“We know that this store is important to the community and we’d like to thank them for bearing with us while this extensive project took place,” she said. “We’ve been getting lots of compliments on how it’s looking outside. We can’t wait to show off the inside too!”

Planning for this major project started in 2014 and Lincolnshire Co-op has worked closely with the heritage experts at East Lindsey District Council.

“It’s been a complex scheme and one it was worth taking our time over,” said Store Development Manager Matt Wilkinson. “It would’ve been easy to just refit the shop, but we want our outlets to enhance the local environment and that’s why we’ve invested in this project in Tattershall.”

“In total, they took about eight weeks to make and were produced using sapele hardwood, which gives an authentic finish but is hardwearing.

The store opens at 7am on Thursday 25th June and will be open Monday to Saturday from 7am to 10pm and Sunday from 10am to 4pm.

There will be social distancing measures in place including a limit of 20 customers at a time, markings on the floor showing two metre distances, till screens and a sanitising station.

Lindum will start work on new roadside services in south Lincolnshire next year after Government planning inspectors approved the plans. Twenty five jobs will be created by the development on land near the A15/A1175 roundabout at Market Deeping. South Kesteven District Council’s planning committee initially refused permission for the 24-hour petrol station and convenience store. […]

A major extension to Sleaford’s National Centre of Craft and Design will begin to take shape in the coming days as its new steel frame is installed. It is a major milestone for the £1.2 million project, which is due to finish in May next year, and comes just weeks after MRI Software revealed it […]

New drone images show how Lindum’s work to build new hotel in Newark is progressing. Due to open in February 2021, the 66-bedroom Travelodge is well into its second phase of construction. The development will generate up to 70 new jobs and further enhance Newark as a tourist destination, while creating new retail opportunities for […]

Partners involved in delivering a new cinema and leisure experience in Doncaster town centre enjoyed a preview ahead of its opening in the coming weeks. The £8.5million Savoy cinema complex will open its doors for residents and visitors in mid-September. The impressive six screen cinema and leisure complex has been developed and project managed by […]