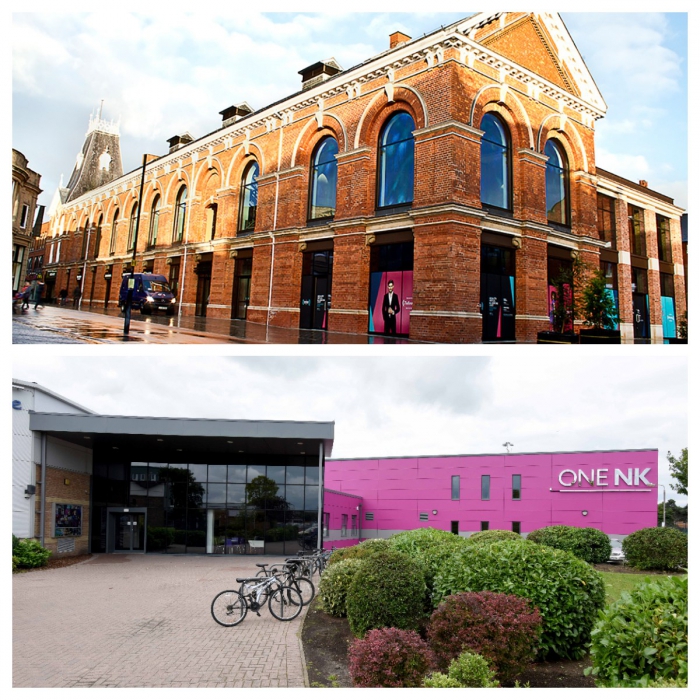 Lindum Group’s work to redevelop a community sports complex and restore a landmark Lincoln building has been celebrated at a regional award ceremony.

Two of the Group’s construction projects were rewarded at the RICS Awards 2018, East Midlands, which took place last week.

The renovation of North Hykeham’s ONE NK leisure centre won the Tourism and Leisure category at the event on May 3.

And the redevelopment of Lincoln’s Corn Exchange was Highly Commended in the Building Conservation category.

The annual ceremony was held at The Belfry in Nottingham and celebrates inspirational initiatives in the region’s land, property and construction sectors.

Other winners included the development of One Angel Square in Northampton and The Get Busy Living Centre project in Melton Mowbray, which involved the transformation of a former aircraft hanger into a sporting rehabilitation centre.

All category winners will go on to compete against other regional winners at the national RICS Awards Grand Final on November 2, 2018 in London, for the chance to be crowned the overall UK winner in their respective category.

Lindum Group was delighted to see two of its project recognised at the high-profile awards ceremony.

Director Freddie Chambers said: “As a Lincoln-based construction company, it’s important to us that our work enhances the local landscape and both of these projects are in prominent locations at the heart of their local communities.

“To be involved in the renovation of a leisure centre that’s just a stone’s throw from our office – which is used by our employees, our customers and their families – is very satisfying.

“Likewise, to be part of a huge effort to breathe new life into an historic building like the Corn Exchange is immensely rewarding.

“Both these buildings leave a lasting legacy for the community and it’s fantastic that the RICS judges have recognised that.”

ONE NK was completed by Lindum’s BMS Division for North Kesteven District Council.

The £3.6m investment significantly upgraded the facilities at the centre and involved extensive phased works on a ‘live site’ being used by both the school and general public.

Improvement to the air conditioning, heating and lighting along with new female dry changing area incorporating private cubicles and showers and the relocation of the cafÃ© area to the ground floor was undertaken. This was followed by the conversion of two squash courts on the second floor to create a new gym, a spinning classroom and a male dry changing room involving installing a mezzanine floor and new suspended ceiling.

A major element of the final phase works was the upgrade of the swimming pool and surrounding areas including the removal and replacement of the flume. The new flume installed has a section of the chute passing outside the building and incorporates multimedia features such as selfie cameras, lighting and music options for users.

The building work was carried out as part of the first phase of the major £70 million redevelopment of the Cornhill Quarter.

Steeped in history, the Corn Exchange dates back to 1879 and has a long tradition as a trading location, from its original market hall roots to its more recent use as department store and retail units.

The reconfiguration of the site included demolition works and a new extension to the original building in order to create the larger, modern retail units totalling circa 25,500 square feet providing premises for five companies which include Cosy Club, Flying Tiger Copenhagen and Moss Bros.

Located within a busy, pedestrianised, retail area of the City Centre careful planning and management were essential throughout the project to ensure safe access and the meticulous works involved to be carried out.

The winners of all seven individual categories were:

A number of Highly Commended were also awarded:

Design through Innovation – ONE NK, Lincoln

Project of the Year, East Midlands

The Get Busy Living Centre project, which involved the transformation of a former aircraft hanger into a sporting rehabilitation centre via donations and contributions from local people & businesses.