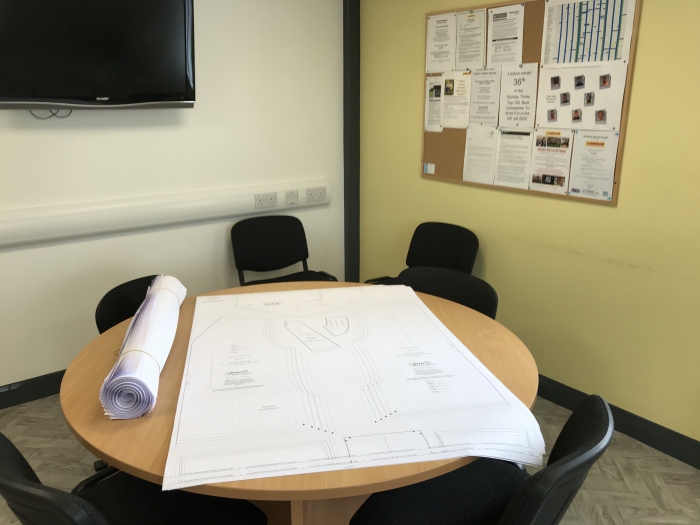 Lindum York is supporting a community effort to produce much-needed scrubs for NHS staff in the Harrogate area.

The Elvington-based construction company offered the use of its super-sized printers to generate hundreds of patterns, which are being used by members of the “˜Harrogate Scrubbers’ Facebook group.

The group was set up by local teacher Fran Taylor, who has committed to providing 700 scrubs for staff working in the Harrogate area to help prevent the spread of coronavirus

Assistant Estimator Sherry Bonnett saw the post and contacted Fran to see how Lindum could help. She was told the group had a shortage of patterns for volunteers to use when cutting fabric.

The first batch was dropped with Fran off by Lindum MD Jonathan Sizer over the weekend.

“When I saw the post, I thought it was such a great idea and I wondered if there was any way we could help,” Sherry said.

“I spoke to Fran and she explained that the patterns they need are quite large and so not easily produced on typical household printers.

“At our offices, we have large industrial printers which are used to produce technical drawings of buildings. Obviously, they are not in full use at the moment. Offering to print the patterns seemed like a really simple way for us to support such a worthwhile community effort.

“We are a construction company so we are not known for our sewing skills, but there are so many ways people can get involved if they want to help.”

Fran, who has taught maths at St John Fishers High School for over 10 years launched the group in conjunction with Harrogate District Hospital. Liaising with its staff, she has agreed to produce scrubs, laundry bags, scrub caps and waterproof gowns.

She said NHS staff who previously didn’t require scrubs, urgently needed help to keep work/home clothing separate, protecting both them and their families.

“The community response has been genuinely humbling, with offers of help from people stuck at home, community groups, local companies and professional sewing groups,” she said.

“It has created a team atmosphere and real community spirit, actually giving people a purpose and the ability to feel that they are supporting the NHS both through staying at home, but also doing something productive while they are there.

“Just £27 will sponsor three full sets of scrubs plus a laundry bag for a hospital worker which will allow them to protect themselves whilst they are working. This money will allow us to buy fabric and our fantastic network of volunteer sewers, drivers and distributors will do the rest. These scrubs will be delivered directly to workers at the hospital and will make a massive impact on the fight against Covid19.”

HDFT’s Chief Operating Officer and Accountable Emergency Officer, Robert Harrison, said: “˜We are overwhelmed by the public response to supporting both the NHS and our local hospital and staff.

“The ability to change out of work clothes, wash everything at 60 degrees and avoid any cross contamination is becoming increasingly important as numbers in hospitals grow. Community initiatives like this are going to make a significant impact to help us achieve this, as there simply aren’t enough supplies to cover all staff. We are very grateful for the public support’.